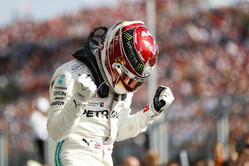 Though he enjoys a 73-point comfort cushion, with just five races remaining, Lewis Hamilton is taking nothing for granted.

Following the summer break Ferrari reeled off three successive wins, with a fourth looking assured until the Scuderia did what it so often does, shoot itself in the foot.

Refusing to ease off now that the finish line is in sight, and only an upset of monumental proportions could derail him, the Briton admits to being more impressed than ever at the performance levels of his rivals.

"It's not that it's difficult," he continued, "it's pretty easy just to focus on the task in hand and it's not easy at the moment so honestly just focusing on trying to be the best I can be each weekend, one race at a time and making sure I'm just delivering at a high rate.

"What's really impressive is just to see how naturally we're fighting against the Ferraris who have got great pace," he added, "but Charles, Valtteri, Seb, Max, Carlos, some of the other drivers are really performing so well.

"I think it's one of the best years I've seen the drivers perform in terms of just class performances, so it's meaning that everyone is having to raise their bar including myself.

"I'm enjoying that challenge and as I said, just one race at a time. The next one is going to be super hard to keep... to try to beat these guys again but not impossible.

"Suzuka is incredible," he smiled, "it's one of the most exciting parts of the year and now so more than ever before because you've got three solid, incredibly fast teams, particularly pushing each other and having the ability, the potential to win a race.

"I have no idea who is going to be quickest there," he admitted. "Obviously, at the moment, Ferraris are quite dominant but maybe it will suit our car a little bit more, who knows? Or the Red Bull, maybe.

"So it's exciting to go there because that's a serious driver's track, one of the best ones of the whole year. The tarmac run-off areas that you see here or around the world... it's proper grass and gravel and walls so it's the ultimate test, I would say, that track, for the car and also for the driver. I just hope that we get to have a good race."