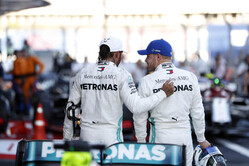 Twelve months ago, Lewis Hamilton secured his fifth title, even though, for the second successive year, he was not on the Mexico City podium.

Now, on the cusp of his sixth championship, the Briton heads to Central America unconvinced that he will be celebrating come the end of the weekend.

"Mexico is generally our worst race of the year because of the way our car is set up," he admits, "and it's going to be a tough one for us.

"The last few have been pretty shocking," he continues, "even though we've won the title there.

"I'm hoping for a better weekend but I think it's going to be very hard to beat the Ferraris with those long straights. We have no hope of getting by on those straights, that's for sure but even if you look at the others, the McLarens are picking up some serious speeds on the straights, so are the Red Bulls so I think it will be a tricky one.

"I don't anticipate it will be Mexico," he replied when asked if the title might be decided this weekend, teammate Valtteri Bottas still in with a mathematical shout. "I think we will be battling for a good few races."

"Everything's possible," said Bottas, "although I'm realistic as well that I will need to be very lucky, that's a fact, to win all the rest of the races but I don't really think about that much at this point.

"It is my bad, mostly, that I've been behind this much in the points compared to Lewis, it's my fault which I try to fix for the future but it is where we are now and just take it now race by race and see how it goes."