Renault duo look ahead to Melbourne

The Australian Grand Prix kicks off Nico Hulkenberg's third season with the team and his ninth year in Formula 1. After posting the fifth fastest time in pre-season testing, Nico is pumped up and chomping at the bit ready to begin the campaign at Albert Park.

How excited are you for the season-opening Australian Grand Prix?
Nico Hulkenberg: I'm very excited to head out to Melbourne. At testing, and across the winter, there was a lot of speculation and anticipation, but the first race weekend is when the talking stops and we find out for real where we stand. Testing went reasonably well, but we don't know anything for certain until we hit the track in Australia. The midfield will always be competitive, but we focus on ourselves, stay on top of things and ensure our developments give us improvements.

What's the mindset heading to Australia?
NH: Our main goal is to put ourselves in a better position than last year. We want to reward ourselves with more points and better results. A lot of hard work has gone into this and we head to Melbourne as prepared as we can be, and I'm quite happy with that. I have a new team-mate who brings a positive challenge. We'll bring out the best from each other. He's a quality driver and we'll test each other and that's a challenge I look forward to taking on.

What are the early feelings of the 2019 package?
NH: It does feel similar to last year's car but that's not a huge surprise given a lot of it is quite stable from last year. I feel comfortable in the car and it was nice to go over 500 laps over the two weeks. We built up a good database ahead of Melbourne. We've certainly improved our package in many areas, but there are also many areas which we need to develop; that's an ongoing story in Formula 1. We're happy with our baseline.

How challenging is the Melbourne Street Circuit?
NH: It's always a challenge going from a two-week test on a smooth circuit to racing on a temporary street track. You feel those bumps in the early Friday running and there's usually a lack of grip as the course won't have been rubbered in. Having said that, it does improve as the weekend goes on, once you grow more accustomed. The setting is very pretty inside Albert Park and it's always packed with fans. There are some fast sections and good kerbs to ride which is satisfying when you get them right. It's a great venue to start the year and I'm very excited to jump in the car for FP1. 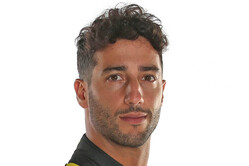 Daniel Ricciardo will don the black and yellow colours of Renault for the first time at a Grand Prix in Melbourne. And with 150 races under his belt in Formula 1, he heads home to Australia ready to rock his new machinery in front of an electric crowd.

How much are you looking forward to your home race, and your first outing in Renault colours?
Daniel Ricciardo: It's an exciting thought that my first race for Renault is my home Grand Prix. There's always so much hype at the start of the Formula 1 season, and this has been amplified by me joining a new team. I've had this date circled since I announced I'd be signing with Renault and I'm looking forward to getting race week started. It's been a long winter with a lot of theories and speculation going around, but the race track is where we settle all that. We had a good winter test, I'm growing happier every time I step into the car and the first race will be especially exciting. I feel comfortable within the team; walking through the garage, stepping into the car all feels cool and real now.

Is there added pressure in front of an expectant home crowd?
DR: I know the Australian crowd will be out there supporting me as the sole home representative on the grid. Hopefully there will be a sea of yellow in the grandstands and that will be really motivating. There's going to be a lot of expectation and attention on us, but we're remaining realistic with what we have set out to achieve. That doesn't deter from the fact we'll be giving it our best shot. The midfield will be close, but we're chipping away towards closing the gap to the top. The first race is the first chapter on this journey and I'll be pushing as hard as ever to ensure we do ourselves proud.

What are your initial thoughts on the Renault R.S.19?
DR: My first impressions, on a whole, have been positive and we'll continue to learn more throughout these early races. It's going to take some time to get used to everything, but that's not unexpected. We're realistic in our approach and we have work to do. We have a decent platform to build on now and we always strive for better. We've found some things during testing which we'll dissect and see what we want to take forward, but our bigger steps will come during the next few months.

What's a lap around Albert Park like?
DR: It's a very enjoyable lap to nail with a variety of high and medium speed parts. Turn 1 is quite high speed, which leads into a small straight and then a hard-braking point at Turn 3. The next complex between Turns 4 and 8 are a lot of fun. It's super quick in these high downforce cars, under the trees with grass verges either side. There's a good overtaking spot into Turn 9, which requires commitment, with the bank on the left of the exit of that turn always packed with fans. The next phase is also very fast with the left, right chicane and then onto another straight. The final part is a bit tighter, but it's important to open up the final two corners to allow a good exit onto the main straight.