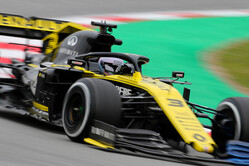 The DRS issue that saw Daniel Ricciardo spin off at high-speed at T1 on Tuesday has been resolved, says Renault.

The Australian was heading down the main pit straight, when the upper part of his rear wing, including the DRS flap, suddenly flew off, meaning the Renault went off at high-speed at T1 as rear downforce was lost.

As a precaution, while Ricciardo didn't run again that day, during the afternoon, Hulkenberg ran without DRS.

On Wednesday, all was back to normal, the situation seemingly resolved, Ricciardo posting the third fastest time of the day as if to prove the point.

"We had a problem with the DRS mechanism," explained Renault technical boss, Nick Chester to rsabet.co.za, "we lost the link bar and then that allowed the flap to rotate.

"Fortunately it's a fairly easy fix," he continued, "we understood what the problem was and then we fixed it and have been running DRS as normal.

"It is a bigger wing," he added, referring to the aero regulations which have seen the rear wing increased in size compared to last year, "it's more loaded, the geometry's changed as well for DRS, we've got a different line of action now for this year so it's just a detail change we needed to make."

Though unwilling to get drawn into the usual pre-season debate of where the various contenders stand, this at a time the F1 is partnering with sports betting online, Chester said: "We are reasonably positive...

"But there's different fuel loads, engine modes, DRS on or off, trying to pick it all apart is quite difficult," he continued. "I think we're reasonably positive but we'll get a better idea when we see more race runs, more qualifying runs. I think there could be a whole group of cars that are quite tight, and we'll learn just how tight that is particularly in the next test."