Abiteboul hits out at Verstappen 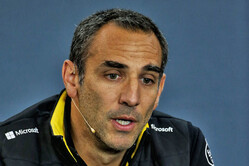 With just six races remaining, it's fair to say that neither Red Bull nor Renault will be sorry to walk away from one another.

The sniping continues from race to race, neither side emerging with much dignity as they take every opportunity to point the finger at one another.

However, Max Verstappen's comments in Singapore, when he referred to "the product in the back of the car" being the root of his problems, clearly riled Renault boss Cyril Abiteboul.

Tired that his company gets the blame for every little issue but never the credit when things go well, the Frenchman was further angered by Verstappen's claim on arrival in Russia that Renault had advised that it's C-spec engine would not perform well in the high altitude of Mexico City.

"I believe that it's fair to say that any engine performs not as good at high altitude," said the Frenchman, "but I guess the power increase that we have seen would have been equal in a track like Mexico so no, I don't agree with those comments in general.

"I think Max should focus on the car," he added. "We do have reliability concerns and therefore it was clear that the engine introduced for Max would not have been able to do all the races so it was decided obviously to go to a different spec. But that's going to the plan agreed with Red Bull's engineering department and not its driving department."

The Renault boss was keen to point out that Verstappen's drive to a strong second in Singapore was powered by the French manufacturer.

"We had a driveability issue in Singapore in FP1, early into the weekend and, to a far less extent, in qualifying," he admitted. "But I think we have a very demanding user in the person of Max, and not very quiet also.

"I think the team has done a great job in order to provide Max what was needed in order to have a good weekend in Singapore, it's very clear. As far as the introduction of the previous-spec engine is concerned, again, that was part of the plan.

"The C-spec, as we call it, is a good step. I think it is a good step that everyone recognises, that Red Bull has a clear step in power that comes also with a certain number of limitations. That was part of the plan to introduce, at a later stage, a B-spec. It's a bit unusual in terms of pattern, but again it's a pattern and a plan that was fully agreed, specifically on the request of Red Bull."