Verstappen: We have the best car 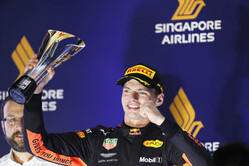 Already struggling for power, Max Verstappen's cause in Singapore was not helped by the erratic actions of his engine, which at times appeared to have a mind of its own.

At one stage during FP3, when asked for feedback, the youngster huffily replied: "The product in the back of this car is not working as it should do", subsequently gesticulating at a hapless Marcus Ericsson amidst his growing frustration.

On Sunday however, a masterful drive, along with a strategic disaster from Ferrari, saw Verstappen finish a strong second, the youngster almost taking a surprise win courtesy of some errant backmarkers.

Speaking at the opening of a new Jumbo supermarket in the Netherlands - a personal sponsor of the youngster - Verstappen declared the Red Bull to be the class of the field.

"I think we have the best car in the field, as we found out in Singapore," he said. "Of course we hope that next year with a new engine supplier it will continue in the right direction.

"We already have the right people on board, but the whole package is not yet right," he admitted. "That will also be difficult next year, but I hope we will have a real chance the following year."

A fierce critic of the Renault engine, even though it has powered Red Bull - and thereby him - to all its wins, when asked why he has confidence in Honda even though the Japanese manufacturer has yet to fully convince, Verstappen replied: "First of all because of the budget they have, which is many times bigger than that of our current engine supplier. Furthermore, they just go in the right direction, also in terms of test bench results. Moreover, they really, really want to win.

"We already have the mentality to want to win in the team," he added. "But now the other side, the engine, still has to be done and we will certainly get that next year."

The new Jumbo Food Markt Groningen features a pop-up store dedicated to the driver where fans can purchase Verstappen-themed merchandise.