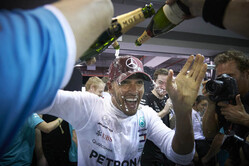 Though it wasn't the thrill-fest the broadcasters promised, the Singapore Grand Prix wasn't quite as bad as Ferrari would have us believe.

Though, from the outside, Lewis Hamilton appeared to cruise to victory, thereby extending his championship lead to 40 points, the Briton admits that things got a little interesting when he was lapping backmarkers in the latter stages of the race.

After 38 laps, the Briton has a 4s comfort cushion to Max Verstappen, but losing time behind the feuding Romain Grosjean and Sergey Sirotkin, the world champion suddenly found himself under attack from the Red Bull driver, the two almost side-by-side at one stage.

"It definitely got a little bit interesting towards the end with some of the backmarkers which was incredibly difficult," said the Briton. "You already felt the draft from the cars when you're five, six seconds behind and the car starts sliding a bit more.

"Max had an opportunity in Turn 10," he continued. "I had to go on a massive defence and even then I was racing the backmarker and they still weren't lifting as I was alongside them.

"You can't see the blue flags," he warned, "they're very dark blue and in the smallest holes out there so you actually can't really see them until the light panels come on and then you can see. But even when the light panels came on a lot of the drivers weren't really responding so it made it very, very tough. It gets your hairs standing up for a second and then it's back to business."

However, despite his brief lunge, Verstappen claims it would have been wrong to benefit from the antics of Sirotkin and Grosjean, who were to both receive subsequent time penalties, the Frenchman for ignoring the blue flags and the Russian for an incident involving Brendon Hartley.

"When I got close to Lewis due to back markers I never really thought the pass would be possible," said the Red Bull driver. "It's hard to overtake here so I didn't want to take the risk. It was also slightly unfair how he had been held up by drivers not getting out of the way.

"My only real chance to win was at the start," he admitted, "unfortunately it was a bit all over the place and I knew my chance had gone. Luckily the team had me on a great strategy and therefore managed to get me back into second place with a brilliant pit stop."