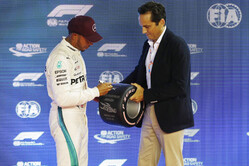 After Ferrari's Kimi Raikkonen broke the track record in free practice yesterday with the P Zero Pink hypersoft, it was further lowered today by
Mercedes driver Lewis Hamilton, who set a brand new benchmark in qualifying on the Pink hypersoft tyre. His pole time was the biggest gap between a 2017 and a 2018 pole time seen so far this year.

With the Pink hypersoft being about a second and a half faster than the ultrasoft around the long lap, all the drivers eventually used it to set their fastest times in Q2, which determines the tyres they will start the race on. Nonetheless, some tried to get through Q2 on ultrasoft, while Mercedes was the only team to successfully get through Q1 on this compound.

The expected quite high levels of degradation on the hypersoft makes a two-stop strategy probable for those starting on the pink tyre. Conversely, there's almost no degradation on the soft, making a one-stopper also feasible. However, the race strategy is likely to be influenced by Singapore's 100% safety car record, which could present an opportune moment to change tyres without a significant time loss.

"Qualifying has set up an intriguing mix of tactical possibilities, influenced by the decision to bring the hypersoft to Singapore. Its unprecedented speed is clearly beyond question, but this has to be balanced against the degradation we have seen so far when it comes to formulating the strategy. For this reason, we have seen a few different ideas during qualifying, and it's going to be fascinating to see which strategy turns out to be the best option. Adding another variable is the fact that the Singapore Grand Prix is a very long and eventful race that has historically always featured at least one safety car period. So the strategies will have to be flexible enough to rapidly capitalise on changing circumstances as they happen. All three compounds coulould definitely play a potential role in the strategy, with nearly zero degradation on the soft."