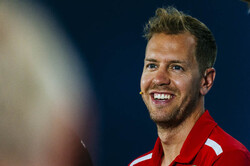 While Kimi Raikkonen topped the timesheets on Friday, Sebastian Vettel was sidelined for much of the second session following a brush with the walls that resulted in "precautionary repairs". As a result, the German missed out on the remainder of his qualifying sim and also the subsequent long runs.

While this is regarded as a bogey track for Mercedes, Lewis Hamilton was only 0.011s off Raikkonen's pace, both Red Bulls looked good, even though over 0.5s off the pace.

That said, a lock-up following a misunderstanding with Vettel wrote off one set of Hamilton's ultras, which, based on Friday's evidence appears to be the 'go to' compound here.

Running a new bargeboard and sidepod vanes Nico Hulkenberg was out-paced by teammate Carlos Sainz who ran with the 'old' versions and ended the day 'best of the rest'. Whether the Spaniard will benefit when given the updated parts remains to be seen.

The Force Indias also featured a number of updates, though the Silverstone outfit admits it needs more time to understand them.

Following a tough morning, which saw Stoffel Vandoorne sidelined by a suspension issue, things improved for McLaren in the afternoon.

Things weren't so good for Toro Rosso however, both drivers unhappy with the balance of their cars.

Though Haas looked scrappy in the morning, it was clear progress had been made in the afternoon, with Romain Grosjean finishing seventh best.

At Sauber, Charles Leclerc celebrated his move to Ferrari in the worst possible way, wrecking his suspension when he clouted the barriers at T13.

Finally, no surprises at Williams, and while the Grove outfit expected to struggle it's unlikely it predicted being over three seconds off the pace.

This morning's session got underway in ideal conditions, approaching 18:00 local time, the air temperature was 29.9 degrees C, while the track temperature was 37.2 degrees.

Yesterday's pace-setter, Raikkonen, was the first to post a time, running the hypersofts the Finn got things underway with a 1:40.012. Shortly after, teammate Vettel responded with a 40.008.

Despite yesterday's incident, the German continued to push it to the limit, getting frighteningly close to the barriers at the very point he previously came to grief.

While Bottas and Hamilton were among the early risers, unlike the Ferrari pair, the Silvers Arrows ran with softs, their choice reflected in the 2s gap to the red cars.

The early part of the hour saw drivers either on softs or hypers, though a couple tried the ultras.

AS for the Bulls, it was almost twenty-five minutes into the session before Verstappen and then Ricciardo emerged. The McLaren pair also late to join the party.

While the Mercedes pair experiments with the softs, the order had a strange shape about it, Ocon, Grosjean, Gasly and Hartley all in the top ten, along with Leclerc and Perez.

Like Mercedes, Red Bulls' early running was on the softs, however, unhappy with his car, Verstappen opted to pit without posting a time while Ricciardo was 2.1s off the pace.

Just over half-time, Vettel came out on the hypers again, and immediately raised the bar with a 38.054, 0.6s quicker than anything seen on Friday. Hate to use the cliché, but the Ferrari really did appear to be on rails.

With 25 minutes remaining, Verstappen finally posted a time, the Dutchman going third on the softs, albeit 2.772s off the pace.

Shortly after, as Raikkonen improved to 38.416 on the hypers, the Mercedes pair headed out on the pink-banded rubber. Despite being quickest in the second sector, Hamilton could only manage 1:38.738, 0.684s off the pace. Bottas posted 38.779.

As was the case with the Ferraris, despite their best efforts the Mercedes pair were unable to get a second hot lap from the hypers.

His frustration growing, Verstappen struggles for words as he tries to describe the erratic behaviour of his engine.

As more and more drivers switched to their qualifying sims, Grosjean went fifth, with teammate Magnussen subsequently going sixth with a 40.559.

With seven minutes remaining, Sainz was the first of the Renault drivers to switch to the hypers, The Red Bulls emerging on the pink-banded rubber a few moments later.

Sainz went ninth with a 40.591, the Spaniard subsequently demoted when Ricciardo went fifth and Verstappen sixth, both over a second off the pace.

Asked for feedback, Verstappen succinctly responded: "The product in the back of this car is not working as it should do." A subsequent snipe at Ericsson clear proof of the Red Bull driver's growing frustration.

Despite his best efforts, Hulkenberg was only able to manage tenth, the German stopping the clock at 40.450.

Early days, but Ferrari looks very strong, and while Mercedes is sure to something in reserve, one cannot help but feel that Verstappen's frustration is getting the better of him.