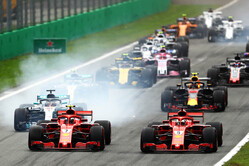 Over the last 24-hours, much has been made of the fact that Kimi Raikkonen's 163.7 mph pole-winning lap was the fastest ever lap by a Formula One car since Juan Pablo Montoya's 162.9 mph lap during qualifying at the same track back in 2004.

Ignoring the various claims and whether they refer to official lap records - i.e. those posted during a race under race conditions - qualifying, practice or testing laps, Kimi's was an astounding achievement.

However, at a time F1 aerodynamics have never been more state-of-the art, even more so that those found on Montoya's 2004 Williams, think of the courage and sheer cast-iron balls required by Keke Rosberg at Silverstone in 1985, or those records set by the likes of Pedro Rodriguez back in the very early 70s, when cars were kept on the ground by prayer and blind faith as opposed to wings.

It's right that Kimi's lap was historic, for Monza is a circuit steeped in the stuff. Long before the Formula One World Championship came into existence, many of motorsport's finest raced here... and sadly, all too often perished here.

At a time the accidents involving Sauber drivers Charles Leclerc and Marcus Ericsson have caused many to have an epiphany in terms of the Halo, how ironic that the Swede was able to walk away from a crash as violent and horrendous as that witnessed on Friday, when far more innocuous incidents at this track have led to the deaths of drivers, marshals and spectators.

While the banking - with which the editor of this site has close ties - receives much of the attention when one talks about the history of Monza, though the track and its facilities have been updated like so many of the other 'old' tracks that remain on the calendar, much of the old infrastructure remains in place.

Walk a few yards back from the side of the track and in moments you'll feel that you have travelled back in time.

Do this in the very early morning as the dew drips from the majestic oaks, or the early evening as the sun begins to set, as the breeze rustles through the leaves you can feel it, you can hear it. Monza oozes history.

Whether Kimi or Seb will give the Tifosi a historic win today remains to be seen, however, if, as Nigel Mansell always claimed, the fans are worth a second a lap, the passion of the Tifosi should see the Ferraris lapping the Mercedes by the end of the fourth lap.

As for Kimi, well, if - as according to some - the Finn is now a 'journeyman', that was some performance yesterday, the Finn spoiling the part not only for Lewis Hamilton but his own teammate, who was convinced he'd done enough.

Much as a win for Vettel would spice up the championship, a win for Raikkonen would spice up the sport. Despite the lack of words, The Iceman has always spoken with his driving, and after a couple of unconvincing seasons he appears to have finally found his voice again.

While this could well be the fastest Grand Prix ever, it should also be the least demanding, the Italian Grand Prix rarely matching fellow events in terms of mechanical attrition.

That said, as witnessed on Friday, it is a circuit that punishes, and punishes hard should you fail to respect it. Overenthusiasm and recklessness will cost you dear here.

Like so many other tracks, getting to and through the first corner is vital, and as the cars jostle for position on the opening lap(s) there is the added aspect of slipstreaming.

As we have said so many times before, the race cannot be won at the first corner but it can certainly be lost there. Also, at Monza, while there is the first chicane to worry about, so too the second chicane has seen many drivers come to grief on the opening lap(s).

While we would like to see Raikkonen win today, we are making no predictions, other than to say we want a safe race.

Clearly Ferrari has the edge, but Lewis Hamilton's dogged performance yesterday - the mark of a world champion - is proof that the Briton has no intention of rolling over.

Amidst talk of Valtteri Bottas assuming a 'wingman' role, this is the circuit where Mercedes might have to make the call, though Ferrari might need to follow suit.

As it stands, Max Verstappen will finish fifth, while Daniel Ricciardo's progress from 19th on the grid should be entertaining, especially on a circuit which rewards bravery.

As for 'best of the rest' you might as well pick the names out of a hat, as a glimpse at the grid proves... Stroll starting 10th, Perez 14th and Magnussen just ahead of Alonso?

As a youngster, having seen the film Grand Prix, the editor was given a copy of the record (album) 'The Exciting Sounds of Grand Prix' released at the same time as the movie.

The album featured the on-board sounds of cars as they raced around a number of tracks including Monaco, Brands Hatch, Spa and Monza.

This was the Monza of 1966, before the chicanes, and as he listened to the on-board sound of Mike Parkes Ferrari at Monza, said editor would trace his finger along the black outline of the track on the back of the record cover.

Even back then it was a magical moment at a magical track. So, sit back, make allowances for the fact that you're not hearing the glorious V12 but the Hybrid V6 and enjoy every moment.

As it happens, 1966 saw a 1-2 for Ferrari, with Ludovico Scarfiotti taking his sole Grand Prix win - and what a place to do it - ahead of Parkes. In 1988, Gerhard Berger led another 1-2, while ten years later it was Michael Schumacher's turn.

The pitlane opens and the drivers head out... their cars 'parked', they head to the front of the grid for an emotive rendition of the national anthem, which features the traditional Air Force fly-past as it reaches its crescendo... red, white and green smoke streaks the sky.

"There may be one or two light spots," Bottas is warned, "but we're not expecting any rain." Hamilton is given a similar message.

All on supers bar Magnussen, Leclerc, Ericsson and Ricciardo who are on softs.

They're away. SA good start for Raikkonen who moves across to cover his teammate, while Hamilton slots in behind Vettel. As they head towards T1, Vettel pulls out to the left of the leading Ferrari while Hamilton goes to the right.

A big lock-up for Raikkonen but he holds the lead as Vettel holds off Hamilton. Further back there is a clash as smoke and a piece of debris fills the air. Magnussen is forced wide and has to head across the grass.

Approaching the second chicane, Vettel and Hamilton are side-by-side, the German has the inside for the first part but the Mercedes driver will be on the inside for the second. They touch, Vettel spins and loses a chunk of his front wing. "Where did he want to go," asks Vettel as he drops to down the order.

In his efforts to get going again, Vettel performs a donut to get him pointing in the right direction, but they are not the celebratory kind the Tifosi was hoping for this afternoon.

The safety car is deployed. "Vettel hit me," claims Hamilton. The Briton is told he has no damage.

At the end of the first lap, Vettel pits for a new nose and soft tyres, as Hulkenberg, Ricciardo and Ericsson also pit. The Ferrari driver has dropped to 18th.

Hartley's race is already over, the Kiwi having been involved in an incident, having been hit by Vandoorne on one side and a Sauber on the other.

The Vettel/Hamilton clash is under investigation.