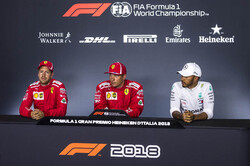 Q: Kimi, we've just witnessed history, the fastest ever lap Formula 1 of Monza. How does it feel to get Ferrari a front-row lock-out?
Kimi Raikkonen: Obviously it's great for tomorrow, but it's only half the job done and I think it couldn't be a better place to be on pole position. It's our home grand prix, it's in front of all the tifosi, so hopefully tomorrow everything goes smoothly and we end up in the same positions.

Q: Well, you've given these guys something to cheer about. Ultimately, they are the strong point Ferrari, aren't they?
KR: They are, always. It doesn't matter where we go around the world, but obviously here at our home grand prix it's full of great tifosi. So hopefully tomorrow is as good as today.

Q: Well all the best for that. Sebastian, second best today, but I don't think the race is lost and these guys will be supporting you tomorrow?
Sebastian Vettel: Yeah, it's unbelievable to see the amount of support around the track, so grazie a tutti. It's a good result for the team. Not entirely happy with my last run, but yeah, I think Kimi was just a little bit too fast in the end.

Q: We heard you on the radio saying 'we'll discuss it after'. Do you think that slipstream got off you made the difference?
SV: It is always like this in Monza and I think for him it was in a sweet spot. I think my last run was OK. My lap wasn't very good, so yeah, I think we can have a look but for now it's good to have both cars on the front row.

Q: Well, have fun tomorrow. Lewis, you almost did it. An extraordinary lap at the beginning of the session but the Ferraris are showing to be very strong?
Lewis Hamilton: Yeah, congratulations to Ferrari, they did a solid job today. We have it everything we could. It's obviously incredibly close between us but they've had the upper hand all weekend. We gave it everything we could today and we'll give more tomorrow.

Q: How hard are you working at the moment, Lewis, to make the difference and how hard are you going to work tonight to try to beat them tomorrow?
LH: Always... everyone in the team is working as hard as they can to make the difference. It's incredibly close, as I said, as you can see, which is great for the sport. It's great to see so many fans here, regardless if they're all Ferrari fans, it's still great.

Q: Kimi, it all came together for you at the end in Q3. Just talk us through that final lap and what it feels like to be back on top here at Monza, of all places?
KR: If you need to choose, for our team it's probably the best place to taker the pole position. Obviously we've been close a few times but it never really went right in the end. It's been a bit tricky, the second chicane, the whole day. The last run was pretty decent, let's put it this way, enough for pole position. Obviously there were a lot of games - who is going first, getting tows and this and that. But in the end, there was a train of cars and that's enough. The car's been working well; obviously conditions have been a little tricky but nevertheless I don't think we've changed the car at all since the first runs really. It all seems to be running pretty smoothly so far, so hopefully tomorrow it's a similar situation.

Q: Kimi, you got quite a reception on your slow down lap as well?
KR: I don't hear them. Obviously we know that we have a lot of fans, a lot of tifosi here, so I think being one and two is great but like I said it's only half job done, so tomorrow is another important part, so hopefully we can give them another great result.

Q: Sebastian, coming to you, it was so close at the top and in the end you just missed out. Was it at the second chicane? Can you just talk us through what happened at the end there?
SV: Yeah, my last lap I wasn't happy with it and I think it was the only chance I had to get a shot at pole. So, well done to Kimi. I think he had a very, very good lap, and did a great job, so it's great to have the cars in one and two.

Q: And Sebastian, can we just get your thoughts on the emotions. This is Ferrari's 60th front row lock-out, and to do it here at Monza, were you feeling the passion of the tifosi as well?
SV: Every time you go out you see them go crazy, whether it's practice or now in qualifying. That's very nice to see. Obviously, I'm not entirely happy with the end of my qualifying but probably that's the emotion that is dominating now - but I think it's great. It's unbelievable before qualifying to see the flags. Around the main straight, the banners they put up and the huge Ferrari logo. I think, yeah, it says 'passion' on the banner and I think that's exactly what the people have. A lot of joy, the whole weekend, screaming us forward. And they're pushing us. So, it's great to get the job done and get the cars on the front row.

Q: Lewis, just a tenth and a half from the man on your right. What are your thoughts after that qualifying session?
LH: It was a fantastic qualifying session. Congratulations to Kimi. They knew that had the pace this weekend. It was going to take something quite special with the lap to catch them but it's generally been that kind of distance between them all weekend. Of course, we were hopeful that we might be able to give them a run for their money which, obviously the first qualifying lap was pretty good - but the second one was... it was still good but it could always be better. It was just amazing how intense it was - and that's how racing should be. So, I really enjoyed it thoroughly, to be honest.

Q: Scott Mitchell - Autosport) Kimi, you mentioned the near-misses you've had in qualifying this year. How important was it to end that here and was it a relief in any way to get that monkey off your back?
KR: Not really. It's not my first one. If this would be the first one then of course it's different but we keep trying always and sometimes it works out, sometimes not. It's not as easy as it probably looks on TV, looking on the screens. Yeah. Today, I think the whole weekend has been working pretty well with everything. The conditions have been changing a little bit but nevertheless I was close. After the practice, we knew that there was three cars, one of them was going to get it and today it was me. Happy about it but it doesn't really change anything. Tomorrow is always the main job to done.

Q: (Christian Menath - Motorsport-magazin.com) Question for Seb. Can you talk us through that last lap? What exactly was not perfect? Was it the timing, that you didn't get the perfect tow or was there a bit of a mistake at some point? What was it?
SV: No. To be honest it was not a tidy lap. I think the other laps were actually better, so... yeah... I lost a bit in the first chicane, the second chicane, the Lesmos, pretty much a bit everywhere. I think the last sector was OK but also not fantastic. It was just not a good lap and not good enough. Obviously lucky to get second instead of third but... yeah. Just not good enough.

Q: (Dániel Horváth - Racingline.hu) Lewis, do you think you need to work harder than ever to beat the Ferraris this year - and does this close competition make you more motivated?
LH: Firstly, I am! Yes, is your answer to that. And the close competition I think is great. It's great for the sport, it's pushing us all, I'm sure within their team and with our team it's pushing us to limits that we didn't even know we could go to - so, that's what the sport is about.

Q: (Joe van Burik - Autocar.nl) To follow up on that question to the Ferrari drivers. Exactly one year ago you seemed to be in a similar position looking at the championship standings. Are you confident you can keep up the momentum now going to the end of the season or has anything changed compared to last year?
KR: A lot of things have changed since a year ago but I think the aim is always the same. It doesn't matter which team you are in, which year it is. Obviously, we want to win. It's simple as that. What will happen at the end of the season and the end of the championship, nobody knows. We can only do our best as a team and, yeah, work as hard as we can. Is that enough? Time will tell. That's the aim. I will not start guessing what will happen.

Sebastian, anything to add?
SV: No.

Q: (Rebecca Clancy - The Times) To Sebastian. It sounded like your initial radio message after you crossed the line on your final lap, as it you thought you had got pole position - and then you were told it was P2, and said "Oh, we'll speak after", is there anything in particular you're going to speak about. And, secondly, will there be any conversations about team orders before tomorrow's race?
SV: No, I don't think anything related to that. Clearly I wasn't happy - but I don't tell you why.

Q: (Heikki Kulta - Turun Sanomat) Kimi, it's very difficult to tell from your emotions, but was that the greatest feeling you have ever had after qualifying? Putting Ferrari on pole?
KR: I think I have 17 times before a similar story. This is a special place, for sure, to get the pole position in our home Grand Prix, in front of all the fans. But it isn't any different to the other ones, in many ways. It's good today, hopefully tomorrow is another good day.