Grid penalties for Ricciardo and Hulkenberg 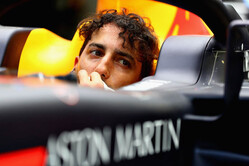 As expected, Daniel Ricciardo and Nico Hulkenberg will start from the back of the grid on Sunday.

While Ricciardo always expected a grid penalty as Red Bull tries the latest spec unit which is understood to be more powerful than its predecessor but less reliable, the option to give Hulkenberg a new unit follows the grid penalty already imposed for his part in last week's incident on the first lap at Spa.

Having been demoted to the back of the grid in Belgium following an engine change, it is the second successive race at which Hulkenberg will start from the back.

Like Ricciardo, Max Verstappen will also use the latest spec engine, but won't use it until tomorrow (Saturday). However, as this will be his third unit of the season it is without penalty.

Unfortunately, even though he will receive a penalty this weekend, Ricciardo expects a further engine change before the end of the season.

It's understood that Verstappen will also require a further engine change before the end of the year.

Currently, Ricciardo is due to start 19th and Hulkenberg 20th.