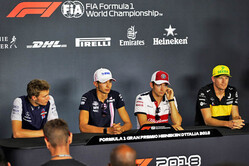 Nico, can we start with you please and take a look back at last weekend's Belgian Grand Prix and what happened at the start, specifically talking about the halo because opinion was divided about that prior to the start of the season, even among the drivers? Has your accident with Charles Leclerc changed your mind about the halo?
Nico Hulkenberg: For sure. I think it's proven pretty useful and a good device. Obviously we can only speculate what would have happened without it but it looked pretty clear from the point that the tyre marks were obviously all over the halo and from that point of view it's done a very good job, to keep the head safe.

And looking ahead to this weekend, Nico, you're carrying a ten place grid penalty but what do you think you can do in the Renault?
NH: Yeah, it's obviously not going to be an easy weekend, carrying that penalty. Monza, perhaps a difficult track for us but it is what it is. We approach this weekend open-minded and want to deliver a good weekend and specially have a good race on Sunday, regardless of where we start or how difficult it seems. It's always fun to race around here so just look forward to getting back in the car tomorrow and start this weekend.

Charles, what was your over-riding emotion after the race on Sunday?
Charles Leclerc: The frustration to have not finished the race, to be honest. I was just very frustrated because obviously in the last few races we have been quite unlucky. Then looking back at the images (of the accident) we can't know what will have happened without it (the halo) but obviously I was quite happy to have it over my head and as Nico said, I think it deserves to be in Formula One now, whether it looks good or bad, I don't think that matters any more.

And we're at Monza, last European race of the year. There's quite a lot of talk about next season. Just wondering if there's any movement on what you'll be doing in 2019?
CL: For now, not really. For now, I didn't have any information so I'm just waiting and hopefully I'll be able to say soon.

Esteban, a lot of chat about 2019 this afternoon, so Spa last weekend was a spectacular result for you. Just talk us through your emotions after the race and how you feel it's going to impact on your job prospects going forward?
Esteban Ocon: Well, thank you very much, first of all. Of course it was a fantastic weekend and a fantastic qualifying, obviously. After tough time, we are back in a great way. It brings joy to everyone in the team, the mechanics, the engineers, everybody was pushing hard and had tough times but that's totally behind, everyone's happy now and of course then the cherry on the cake, the fifth and sixth in the race. A good start from me as well and a good result in the end with 18 points and we couldn't come back in a better way and start in a better way.

Sergey, if there are changes at Force India in 2019, there's a chance they might affect Williams as well so what can you tell us about your job prospects going forward?
Sergey Sirotkin: Obviously I can follow on the changes that could probably happen. I'm afraid I don't know much more than what I can read on the websites but in terms of myself, I think - I've said this a couple of times already - I think I quite clearly really know my position in the team. I think I'm quite happy with the job I'm doing for them. They know my position, they know what they can get from me so if you want a concrete answer I'm afraid not right now, right here, but if I have any worries, I'm afraid (inaudible)

(Dieter Rencken - Racing Lines, RaceFans.net) Nico, if we go back to Spa last year you are quoted as saying that you are totally anti the halo, not only because it looks stupid but the likelihood is minimal that an accident will happen in which a halo is actually helpful. Do you still agree with that statement?
NH: I think... whilst I am still not a big fan of halo and the device, I have to see the facts and admit that it does bring something to Formula One, especially the safety that we appreciate in the car. Yeah, divided, mixed feelings about it still but it's not down to me anyway. It is what it is.

(Scott Mitchell - Autosport) Esteban, the result last weekend, the performance in qualifying and the race, did that do anything for you in terms of settling you down for your short term future or are you now more confident about what's going to happen to you between now and the end of this season, let alone 2019?
EO: Well, I hope it does definitely help. As a driver, the only talk you can do is on the track anyway, so that's what I'm trying to do at the moment but yeah, still no news, only rumours and talk so as soon as I know more, I will let you know.

(Daniel Majer - Origo.hu) Obviously Monza is all about speed and you were not racing under the V10 regulations but at that time, speed records were broken here. If you would chose just for this particular Grand Prix to switch to cars that are much faster in a straightline, would you do that or are the current ones OK?
SS: Honestly, I didn't know the cars and how they've been in those times but I think this year's cars are quite quick in a straightline. Obviously they're missing a lot of engine sound but from the pure speed-wise I don't think they're any slower than what they've been in whatever year you say with the V10s. So yeah, I wish I could try them a couple of times, but if I would swap them for the weekend I'm not sure.

EO: For sure, the sound was amazing back in the days of the V10s, V12s, also V8s were very nice but the cars we are running now, they are breaking all the track records so I think they're quick enough, 1000 horsepower, amazing speed, so yeah, it's quite enough.

CL: I think in the same way as Esteban. I think a bit more sound would be nice but again, I'm extremely happy about driving these cars. As you said, we've broken quite a lot of records this year; I think it's one of the fastest cars - probably the fastest car - in F1's history so very happy to be in this.

(Frederic Ferret - L'Equipe) Charles, as an Alfa Romeo driver and member of the Ferrari Academy, what is your feeling driving in Monza this weekend?
CL: It's absolutely amazing. Also in the past few years, Monza has always been a track where I've always had a lot of support, first being part of the Ferrari Academy of course and yeah, also this year arriving at the track this morning, you can really see that with the return of Alfa Romeo, an Italian brand, that there's a lot of interest in us and a lot of people are here for us which is great to see. I actually had more support this morning here than I had the Thursday in Monaco so it feels a little bit like a home race and it definitely gives a big boost to the whole team.

(Fulvio Solms - Corriera dello Sport) Charles, you have a strong Italian side and spent so much time in this country. So which are your best and your worst memories of your Italian period?
CL: My best memory, it's probably my first ever car win that I've had in Italy, in Monza actually, here, in 2014. I can remember I had quite tough first races in car racing and finally I could manage to win my first race here in Monza, so that's probably my best memory. My worst memory? I don't have much, to be honest. Probably when my tyre went flat on the motorway next to Maranello, that wasn't a great memory.

(Joe van Burik - Autocar NL) Charles, following the halo debate that's gone on after Spa, I was wondering to get your thoughts if you're more aware of driver safety in F1 following the accident of your friend Jules Bianchi?
CL: Obviously it has been a big shock when I... when we all lost Jules. It was very sudden. I don't really get the question. Can you repeat it? What do you want me to...?

(Joe van Burik - Autocar NL) Just wondering if you're more aware of safety maybe added by the halo device, following that accident?
CL: Speaking for Jules, it wouldn't have helped anything because the cause was not... it was just a shock and the shock was too big. Then I believe that in certain circumstances it can help. If it helped or not at Spa I have no idea but in some circumstances it can help so I think it's a good thing to have.

(Daniel Horvath - Racingline.hu) Charles, what about your future, when can we expect some news?
CL: I have no news for now. As I said earlier I'm just waiting for some information and as soon as I know, I will let you know but for now I don't know.

(Alex Roos - L'Equipe) Esteban, can you explain why Monza is a special GP and how it's different from the other ones?
EO: I think for a few reasons it's the temple of speed so the speeds we are achieving are massive. Racing is good because of the long straight, the slipstream. We run low downforce and yeah, it makes great racing overall so that's the technical part. And then the atmosphere is just very much different to anywhere and the tifosi are amazing fans and they give us a lot of support and they are here, then they are massively here, waiting for us when we arrive at the entrance. It's such a happy and joyous... everyone's happy to be here and you don't live those moments at a Grand Prix everywhere like that and it's very special.

(Barbara Premoli - Motorinolimits.com) Charles, can you explain to normal people like us how your body and mind reacts to a big shunt like the one we saw in Spa last week?
CL: To be honest, I think it looked a lot bigger on TV than it actually was. I felt, obviously, Fernando going over me but it was not like it was a big big shock. So yeah, the only thing I had in my mind is that I was just hoping for some miracle that the car was not damaged enough to go back to the pits but obviously when I looked in the mirrors again I saw that everything was gone so I couldn't... I just found a way to stop the car and that's it. But yeah, the images look very spectacular but from inside the car it was not such a big shunt.