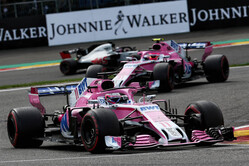 Though the mood in the Spa paddock indicated that everyone was delighted to see it was basically 'business as usual' for Racing Point, it changed somewhat when it became clear that in addition to being allowed the prize money its predecessor Force India had earned in 2017, the outfit may get full prize money payments from the outset rather than having to wait two years as is the custom with brand new entries.

Despite the best efforts of the FIA and Chase Carey over the course of the Spa weekend - which is understood to have included various levels of 'persuasion' - the necessary unanimous agreement on the move is not yet forthcoming.

Though he understands the feeling of those questioning the move, Szafnauer insists that his team should be treated differently to other new outfits.

"I understand why a new entrant needs to finish in the top ten for two years in a row, to start getting Column 1," he told Motorsport.com. "In the past when teams would enter, not really have the resources to enter and then they would be in for a bit and out, and in, and Bernie didn't want that.

"This team has been racing for 25 years," he continued. "It is not a new entrant. There is no question of survival going forward. So that bit of it doesn't really apply, not to mention 25 years ago when it entered it probably had to do that. So why do it twice?

"If you look at the purpose of not receiving column 1 twice, this team doesn't apply for that purpose, that objective."

Fact is however, that the team that had "been racing for 25 years" is no more - to echo the infamous Monty Python sketch: It has ceased to be! It has expired and gone to meet its maker! It is stiff! Bereft of life. It rests in peace! Its metabolic processes are now history! It's kicked the bucket, shuffled off this mortal coil, run down the curtain and joined the bleedin' choir invisible!! It is an ex-team.

Racing Point is not Force India, nee Spyker, nee Midland, nee Jordan, it is a brand new team entered under an entirely different ASN and with an entirely new F1 Team Agreement. It has even paid a new entry fee - a somewhat eye-watering amount if speculation is to believed - and far in excess of that (already) paid by Force India.

Despite Szafnauer's, almost subliminal, insistence that "the cars are still pink, still have the same sponsors, still have the same drivers, have the same motorhome and same employees. You look at us, we're exactly the same." The fact is that Racing Point is run by a company which was set up at the start of this month and has just one race under its belt.

Furthermore, while he adds that "there is no question of survival going forward", it is the very fact that Force India got into financial difficulty and its future became uncertain, that this whole sorry mess came about.