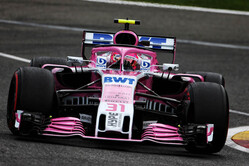 In all honesty, some aspects of the recent process and its after-effects appear to have been made up as it went along, therefore it comes as no surprise to learn that the deal which saw Force India bought by a consortium led by Lawrence Stroll is seemingly far from done.

As we know, Force India was placed in administration on 27 July by Brockstone, the company which manages Sergio Perez who was reportedly owed $4 million by the team.

Previously due to other debts owed by Force India, most notably to HMRC, the team was threatened with being wound up. As opposed to a winding up order, when a company is put into administration the objective is to try to rescue it through a restructuring or sale.

At the heart of Force India's issues was Vijay Mallya's 'problem', the former billionaire currently fighting off demands for his extradition to India where 13 banks are seeking the return $1.3bn in unpaid loans to his now defunct Kingfisher airline.

Unable to get their hands on the man himself, the 13 banks put a worldwide freeze on his assets, which was as painful as it sounds, for it meant they had to give their approval to the sale of Force India.

As a result FRP set a deadline of midday on 17 August by which time interested parties had to register their bids.

Apart from anything else, were the deadline missed, and the necessary funding not put in place, there was the fear that the Silverstone-based outfit might have to miss a race, thereby adding to its troubles, and cause an exodus of staff as they feared for their futures - team principal Otmar Szafnauer yesterday confirming that in some instances this was the case.

Unfortunately, the deadline didn't give the banks the required time to give their approval and as a result FRP changed its tactics. Instead it opted to sell the team's assets, a move which didn't require the approval of the banks as the administrator has full control over a company's assets whilst in administration.

Lawrence Stroll's consortium had already set up a company called Racing Point UK which is ultimately owned by Racing Point limited in the British Virgin Islands.

However, according to Forbes, rather than buying the team, the consortium bought the assets, its cars, factory, and everything else needed to go racing.

Unfortunately, this didn't include the entry to the Formula One World Championship which allows a team to go racing, or the rights to around $40m in outstanding prize money, for both were owned by Force India not the new Racing Point outfit.

Transferring the prize money requires agreement from the other teams - in this case 9 - as they would share it if Force India were no longer racing. However, Otmar Szafnauer yesterday revealed that Racing Point will indeed receive the prize money Force India had accrued in 2017, while admitting that the race entry issue had also been resolved.

Under normal circumstances - a rarity in F1 - entries have to be submitted by 1 November of the preceding year along the fee payable by the end of that month to the FIA. The fee is calculated on the number of points earned and came to $1.5 million for Force India last year.

However, it's understood the fee that Racing Point paid the FIA was significantly higher.

Article 8.1 of the Formula One Sporting Regulations states that applications which are received after 1 November "will only be considered if a place is available and on payment of a late entry fee to be fixed by the FIA."

Yesterday, Autosport pointed out that a place became available the moment that Force India 'went under', "what we haven't been told so far is the size of that entry fee, but it is understood to be a significant sum".

Clearly the fee was enough, for on Thursday the FIA issued a press release proudly claiming that it had approved the mid-season entry from Racing Point with immediate effect.

However, the press release, which saw FIA president Jean Todt the very first to comment on the move, added that "since the Force India Formula One Team Limited was placed into administration on 27 July, the FIA has worked in collaboration with the Joint Administrators (Geoff Rowley and Jason Baker of FRP Advisory LLP), Racing Point UK Limited and Formula One Management to ensure the expedient and compliant transition of the team's assets to the new entrant".

In other words, according to the press release, from the day that Force India went into administration, the FIA's aim was for Racing Point to be the new F1 entrant.

With other potential bidders one wouldn't usually expect the sport's regulator to have had a favoured bidder when the administrator began the bidding process.

Then, at a time everyone thought the deal was done and dusted and all that remained was a new official team name and the confirmation of the team's 2019 line-up, Uralkali, one of the world's largest potash producers and exporters, revealed that it submitted a proposal to purchase the business and assets of Force India as a going concern but was ignored by FRP.

In a statement Uralkali said that it "assembled a team of professionals (including lawyers, accountants, insolvency experts and a Formula 1 specialist) to prepare and submit a competitive bid for Force India, which was led by Uralkali's independent director Paul J Ostling."

"Both options proposed sufficient funding to satisfy claims of all creditors in full and included an undertaking to provide significant working capital and new investment program over a 5-year term to ensure success of Force India."

Crucially, the statement claims that these options met legal requirements as "under English law, the objectives of the Administrators' activities are to rescue Force India as a going concern or, if that is not possible, to achieve a better result for the company's stakeholders as a whole."

Not only is Uralkali chairman and shareholder Dmitry Mazepin the father of Force India test driver Nikita Mazepin, it has been revealed that he previously helped fund Force India to cover its increased costs in 2016 due to the regulation changes set for the following year.

Uralkali admits it had to abort its initial plans due to the time-frame set by FRP. In addition to getting consent from the 13 banks by 17 August the statement claims that "on August 4, 2018 (a Saturday), the Administrator informed Uralkali that it would only consider the proposed rescue option if Uralkali provided, by 4pm on August 6, 2018 (i.e. in less than one business day), a binding agreement with Force India`s shareholders to acquire their stakes."

Uralkali's statement adds that to address the timing hurdles it submitted a restated proposal on 6 August which "no longer offered a rescue option but set out a very attractive proposal to purchase business and assets of Force India on a going concern basis."

It claims its bid still involved clearing all of Force India's debts, including what it calls "questionable last-minute claims", a cash consideration being paid to the team's shareholders and commitment to a development plan for the team and an incentive plan for its employees.

However, Uralkali claims it hit a brick wall. "Following the submission of our proposal, the administrator refused to engage with Uralkali team, did not reply to phone calls and emails and communicated with Uralkali in a single email following close of business on August 7, 2018 that it had entered into an exclusivity arrangement with another bidder regarding a proposal to rescue the company.

"Despite expiration of the deadline set by the Administrator, no rescue plan was submitted to the court for approval, which confirmed Uralkali's view that the rescue option was not achievable in the timeline and under conditions proposed by the Administrator. Under these circumstances, it is surprising that no attempt was made by the Administrator to engage with Uralkali with respects to its bid for the assets and business of Force India."

The statement stresses that "over the course of the bidding process and discussions with the Administrator, Uralkali insisted on a transparent and fair process to ensure equal opportunities for each bidder.

"In particular, Uralkali proposed that the bidding process be conducted by way of the submission in sealed envelopes of best and final bids to be opened in the presence of appointed representatives of the interested bidders. However, this proposal was rejected by the Administrators."

Responding to the claim, FRP told Autosport that: "All bidders were given equal opportunity to submit the best deal for Force India.

"Throughout, we (the Joint Administrators) have closely followed our statutory duties and objectives as administrators and had the advice of experienced legal counsel."

However, this doesn't wash with Uralkali, which last night issued an ultimatum which said "Uralkali has serious concerns about the conduct of the bid process for the acquisition of Force India. Debevoise & Plimpton LLP, Uralkali's lawyers have accordingly this evening written to the administrators, FRP Advisory LLP, informing them that unless satisfactory explanations are forthcoming by 10 a.m. British Summer Time on 10 September 2018, court proceedings will be brought against them."

And as if that wasn't enough, other than the obvious frustration of Uralkali, those 13 Indian banks now have a freezing order on a company which has no assets and has lost $40 million of prize money.