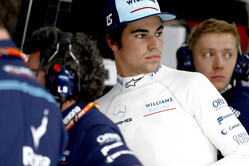 Right now, in the eyes of many, the only thing that might prevent Lance Stroll leaving Williams for his father's new outfit in 2019 - if not sooner - is the name.

Though his Dad leads the consortium that has bought Racing Point Force India, Lance Stroll insists that he still has a contract with Williams for next season, and that plans to leave the team have not been discussed.

However, amidst speculation that the youngster could be in the Racing Point car as early as next week, with Robert Kubica replacing him at Williams and Esteban Ocon heading to McLaren, Stroll was giving little away.

"I'm committed to Williams, I have a contract with Williams," he added. "We've achieved some good success in the past, last year, so right now I'm going to try and beat them (Force India)."

Pushed harder, he said: "For the moment, I am here at Williams, I am not sure what I will be doing in the future. We'll see what my father decides to do. He's a nice guy, I'll hope he takes me."

Asked if he had been involved in any of the behind the scene negotiations, the youngster said: "No. He has done his due diligence and he sees that they currently punch above their weight. They do a really good job with what they have so he sees a lot of opportunity and a lot of potential. They are in a very difficult position and he believes he can help grow the company and make them as competitive as they can be.

"At the moment I am at Williams," he said once again, "we will see what happens with me in the future.

"I wish him all the best with Force India," he added, "it is definitely a very exciting future for him. But I am just focused on this weekend and what I am doing the rest of the year."