Fernley out as Force turns to farce 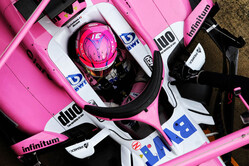 Force India's deputy team principal, Bob Fernley, has left the Silverstone-based outfit with immediate effect, as the situation around the team becomes ever more confusing.

Fernley, a long-time employee of Vijay Mallya, has been with Force India since the team was bought by a consortium led by the Indian businessman and Michiel Mol in late 2007.

With Mallya's legal issues preventing him from leaving the UK, Fernley effectively became the face of Force India, though in recent months chief operating officer Otmar Szafnauer has increasingly been the man to face the media.

News of Fernley's departure comes at a time there is still confusion as to whether the team will actually race this weekend.

With the official entry still owned by the original Force India it is increasingly looking as though the team rescued by Lawrence Stroll two weeks ago will have to register as an entirely new outfit.

Though officials are working desperately on a solution, one should bear in mind that Williams, McLaren and Renault have already proved a stumbling block.

According to some the most likely scenario is that Force India will register as an all-new team - though it remains to be seen whether this can be done in time for this weekend's race.

A new team would mean the loss of all the points Force India earned in the first half of the season, while it could also mean a change of driver line-up in time for next week's race at Monza.

It is currently being suggested that Lance Stroll would move to Force India - or whatever it is to be called - with Robert Kubica replacing him at Williams and Esteban Ocon heading to McLaren.