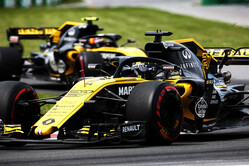 As we wait (and wait and wait) on the various proposals for 2021, Renault boss Cyril Abiteboul has spoken of his fears for the future in terms of the engine formula.

At a time rival manufacturers are still, despite the FIA's continued assurances, scratching their heads over the obvious improvement of the Ferrari power unit, Abiteboul believes that the only way in which the governing body can ensure that everyone is 'signing from the same page' in terms of legality is to standardise more engine components.

"I don't want to create a debate here," he said, according to Motorsport.com, "but I think we need to think how we can help the FIA, regarding the enforceability of the regulations.

"I really believe that the complexity of the engine is such that I would not want to have myself to police it," he admitted. "So, I think we need to figure that out.

"I really believe that some elements of standardisation are not just useful but absolutely necessary if we want to retain some confidence between all the participants," he continued.

Revealing that his company has already made a number of suggestions aimed at assisting the FIA with its policing, the Frenchman said: "I think that, frankly, if we wanted to cheat on the current engine, we would know how to do it, and that's an issue. We are a very large corporation and we would never do such a thing like that, we can't afford the reputational risk.

"I'm not saying that anyone is cheating," he added, "but I think it'd be good to get rid of all the speculation, by doing some local and targeted standardisation, and we've put forward some proposals in relation to that."