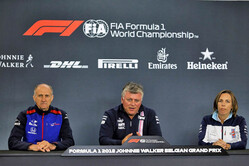 Otmar, not much of a summer break for you, I'm sure it was very busy. But now you are the Team Principal of Racing Point Force India. Can you just talk us through the past few weeks from your perspective?
Otmar Szafnauer: It was a busy few weeks for myself and mainly for the administrator who was trying to find a solution for our administration. I was busy basically informing all of our team members who were on holiday of the goings on and trying to communicate what was happening. It's not an everyday thing, administration, and a lot of people didn't understand the process and when you don't have a good understanding of the process it creates anxiety, so I was just trying to keep everyone together and informed. But well worth it in the end.

And then more specifically, this past week and especially the last 48 hours since arriving at Spa, what's been going on behind the scenes?
OS: I think, from what I understand, it started of as a share sale that then transferred into an asset sale, for reasons I don't quite understand. But once that happened we needed a new entry into Formula 1 and to gain a new entry in a short period of time takes a lot of work, so the last 48 hours was working towards Racing Point Formula 1 Team gain its new entry, and that was a lot of work to do that. But fortunately with the support of the FIA, FOM, our fellow competitors and colleagues within our community, we got it done. I've got to thank the teams as well for supporting us.

Speaking of the other teams, we'll move on to Claire. Force India's future has been closely intertwined with yours based on Lawrence Stroll's involvement. Can you let us know where this leaves Williams going forward?
Claire Williams: First of all, I think this is obviously a great story for Formula 1. Prior to the shutdown we were all slightly concerned as to Force India's fate, and I think Lawrence stepping in and securing the team's future is a great thing, not just for our sport but obviously for the employees, so at Williams we are delighted. I think probably the biggest knock-on effect for us will be the lack of Lawrence's presence in our motorhome. I know that he has spent a bit of time in the Force India motorhome this weekend already. But for us at the moment, it's business as usual. Lance still has a contract to drive for us until the end of the season, he's racing for us here in Spa and Lawrence is still in our motorhome.

You mention Lance. He was sitting in that seat in yesterday's press conference and said that he'll wait to see what his dad wants him to do in the future and hopes he'll take him to Force India. Can you just clarify: will Lance race the rest of the season for you? Is that what you expect?
CW: There are a lot of twists and turns on Formula 1 aren't there? I think we've seen that over the past few weeks alone. I think it might be slightly odd if Lawrence owns one team and his son is another, but hey, this is Formula 1! At the moment, as I said, Lance is contracted to drive for us, he's driving here this weekend and as soon as we have more information, when we know, then we will share that.

Thank you. Franz, a confirmed move in the driver market is that Pierre Gasly will leave yourselves next season and move up to Red Bull. Just what are Red Bull getting in terms of a driver in Pierre?
Franz Tost: They will get a high-skilled, very fast, experienced driver, because Gasly is a good example of how to build up a driver. He was very successful in all the lower categories, where he won races, where he won championships, and when he came to Toro Rosso at the beginning of the season, he was already quite experienced. He is fast, he has a good technical understand, he has a good understanding for the tyre management and therefore I am convinced that he will do a very good at Red Bull Racing.

With Pierre moving up that means there is at least one space available at Toro Rosso next season, but there is not a huge amount of drivers ready at the moment within the Red Bull Junior Programme, so what do you do for 2019?
FT: We will see. Red Bull is discussing different names and I am convinced in the close future they will come up with a name.

(Scott Mitchell - Autosport) Otmar, the situation around the team means that there are quite a few consequences for you guys. So could you just explain what the resolution is on things like championship prize money and where you stand with engine allocations and that sort of thing, and what it means for the team as well?
OS: Well, the biggest consequence is the fact that we start from zero points, so we forego the 49 points, because those belong to Sahara Force India, which is not an entrant anymore. We are a new entrant and we start from zero. We'll do the best we can to score as many points as we can in the remaining race and we'll see where we end up at the end of the season, and that will determine some of the prize fund for the following year. As far as engine allocation goes, we had confirmation today from Charlie that we will continue with the engine allocation and gearbox allocation as if we never ceased racing. I think in his eyes he thought that was the most fair thing to do vis-a-vis the other teams, so that's how we're going to go forward.

Can we just clarify, Otmar, that if you are foregoing the championship points that you had already earned this season, you are having to forego the prize money earned in previous years by Force India?
OS: No. The remaining nine teams have signed, so to speak, a document that enables us to keep the money that Sahara Force India had earned in years past.

(Luke Smith - Crash.net) Otmar, we know that Force India was considering a name change both for this season and looking ahead to 2019 as well. As a new entrant, now would have seemed like a perfect time to get rid of the Force India name. What were the reasons behind keeping that in the new team name?
OS: Isn't that ironic: we wanted to change it, we didn't, then we could have changed it and we didn't? The reason is we started the year with Force India as our chassis name. Formula One, the FIA, they don't like chassis name changes and I understand why, because it confuses the fans. And we thought it was prudent to keep Force India for the fans. The cars' are still pink, we still have the same sponsors, we still have the same drivers, we have the same motorhome, we have the same employees. You look at us, we're exactly the same. I think it would have been confusing to remove Force India. Racing Point was added in front of Force India instead of Sahara - we were Sahara Force India before - that was just so we can distinguish between the old and the new and Racing Point just happens to be the name of the company in the United Kingdom that owns the assets to that's the only reason for Racing Point being there, but the chassis name still remains Force India and I think from a fan point perspective that's the right thing to do.

(Oliver Brown - The Telegraph) For both Otmar and Claire: a lot of people in F1 like to talk about this sport being a meritocracy and yet the conjecture which now links Lance with Force India arises purely from the fact that his father is part of the consortium that controls the team. This doesn't have to be referencing Lance specifically as I know it's sensitive but how much do you feel that F1 genuinely is governed by ability or is it still governed by who you know?
CW: I've talked about this point a lot over the past 18 months. I think the crux of it for us is that as a team, as you would expect, we wouldn't put a driver in our car for a variety of different reasons if we didn't feel that they had the ability to race a Formula One car. These machines are not easy to drive, they're dangerous, you want to make sure you've got somebody who's competent enough to be in that race car and Lance has proved that. I also believe that over the time that he's spent with us at Williams, that he's demonstrated that he's got talent and that he deserves to be in this sport. He had a season last year in his rookie year where he took the first row of the grid in Monza, I think it was. He took a podium, one of the only drivers to do so last year outside of the top three teams. So I don't think that you can say that Lance is only in this sport because of his father.

OS: I tend to agree with Claire. Lance, for sure, especially in the lower formulas, has proven to be a race winner, a winner of championships. We've been watching him too because he's a competitor of ours and the one thing Claire didn't add is that every time it rains it seems like his talent shines and that's usually the sign of a driver that has great car control so we don't know him intimately but for sure he deserves to be in this sport, not just because of his Dad.

(Dieter Rencken - Racing Lines, Racefans.net) Otmar, the situation of yourself is that you've gone from COO to CEO and also team principal. Could you also confirm that you were given a shareholding up to 25% of the revised company please?
OS: Wow. Wouldn't that be great? Haha. Yeah, I can confirm that that isn't the case but I like your suggestion. I'm going to go... before the ink's dry, I'd better go talk to Lawrence and the consortium. That's a good idea, that's a good idea!

(Julien Billiotte - Autohebdo) Otmar, will you keep the same driver line-up for the remainder of the season or could we see changes at Racing Point Force India from Monza onwards?
OS: Yes, for the short term, it's the same two. What happens thereafter it's not impossible to change, that's for sure, but a lot of agreements would have to happen so I don't know, it's hard for me to predict that in the future.