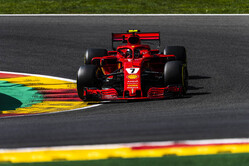 Despite the threats of rain in FP1, and even a few sports of it, there was nothing of consequence and all running was done on slicks.

In a rare moved, Sebastian Vettel topped the FP1 timesheets, the German out-pacing Max Verstappen by 0.151s and Lewis Hamilton by 0.318s.

As expected, Mercedes and Ferrari have brought another upgrade - what with Spa, and Monza that follows, being tow of the most power-hungry tracks on the calendar.

On the downside, Valtteri Bottas is demoted to the back of the grid on Sunday as this is his fourth unit of the year. Similarly Nico Hulkenberg who also received an all-new power unit.

While Mercedes has the upgraded unit for its customer teams also, it appears Sauber and Haas will have to wait until Monza for their upgraded units from Ferrari.

There were no major incidents earlier, though Daniel Ricciardo spent almost all the session in his garage following an engine injector issue. The Australian was able to complete a lap at the very end of the session, his time good for sixth.

Despite the name change, Force India remains 'best of the rest', with Esteban Ocon finishing seventh, ahead of Hulkenberg, Perez and Sainz.

Having handed his car over to Lando Norris, Fernando Alonso will be in action this afternoon, his teammate having lost a lot of track-time earlier due to various issues.

The top times were set on the softs earlier, so this afternoon we should see more running on the supers.

With that grid penalty, Bottas will likely focus on race sims rather than qualifying.

The lights go green and making up for lost time Ricciardo is first out, followed by Sirotkin and Grosjean.

Sirotkin posts the first time of the afternoon, the Russian stopping the clock at 47.781. Moments later, Ricciardo posts 46.161.

Vettel posts 46.101 as more and more drivers head out.

On his way to posting the new fastest time (44.400), Raikkonen asks his team to check his power steering.

As in FP1, drivers are continuing to miss the apex at T4.

A 44.956 sees Bottas go second as mediums and softs remain the order of the day.

Currently 17th (of 17), Vandoorne is told that the team intends changing the floor on his car. Asked if he wants to do one more lap he responds that it is "undriveable". "I think we should box," he admits.

Verstappen complains of understeer after running wide in T11, as Hulkenberg is warned about his continued missing of the apex in T4.

Though he was 'best of the rest' in FP1, Ocon has yet to post a time in this session, the Frenchman having completed just two laps.

With that in mind, Ocon is the first driver to make the switch to supersofts, followed by Sirotkin.

The Ferrari pair also switch to the red-banded rubber.

Ocon's first flying lap sees the Frenchman go eighth with a 45.935, despite being warned that he may have a slow puncture.

On the supers, Raikkonen posts 43.355 having gone quickest in all three sectors. That's 1.014s quicker that Hamilton's time on the mediums.

On the supers Bottas goes second, albeit 0.448s off Raikkonen's best.

Moments later, Hamilton posts 43.523 to go second, the Briton quickest of all in S2.

Vettel, having aborted both his flying laps, is yet to improves on the supers.

A 45.753 sees Hulkenberg go seventh, like Bottas, the German will start from the back of the grid on Sunday.

Gasly improves to 12th (46.175) on the supers as now all but Perez, Alonso and Grosjean have tried the red-banded rubber.

Despite not having the latest upgrade, Sauber pair, Ericsson and Leclerc are 8th and 9th.

Ricciardo warns that his gears aren't changing as quickly as they should.

With 36 minutes remaining, Alonso switches to the supersofts. Posting PBs in all three sectors he crosses the line at 46.153 to go 16th.

A big lock-up for Hamilton at La Source.

Having advised that he's struggling with his rears, Hamilton is told that his pace is good. He's currently lapping at the same pace as his Mercedes teammate, despite the fact that Bottas has only done a handful on his current set of softer tyres

"I'm in a bit of a parade here," warns Verstappen as he leads a train of around seven cars.

Though they looked strong earlier, the Haas pair are currently 12th and 14th, with the Saubers 9th and 10th.

Ocon is asked if he can push harder in T10.

On their longer runs, Mercedes has the edge, but it's tight, with the Silver Arrows averaging 0.2s lap quicker than the Ferraris and 0.4 - 05s to the Bulls. That said, the tyres on the Mercedes are fresher.

Currently 20th, Vandoorne is told he needs to find another half-a-second.