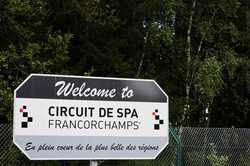 This year's Belgian Grand Prix is the 63rd, with this being the 51st time Spa-Francorchamps has hosted the event. Nivelles hosted Belgium's round of the world championship in 1972 and 1974, while Zolder hosted the event on ten occasions.

Other than routine maintenance no changes of significance have been made.

Tyre choice this year - medium, soft and supersoft - is a step harder than 2017 when the soft, supersoft and ultras were used. But in reality, that isn't the case, because all the 2018 compounds are a step softer than their 2017 equivalents. So, in actual fact, the choice is exactly the same.

The reason for maintaining the same choice, despite the increased performance from the cars this year, is down to the unique characteristics of the circuit. Although it's the longest track of the year, with some big corners and compressions that put plenty of energy through the tyres, the compounds selected last year proved to be the right choice.

Last year's race was won by Lewis Hamilton, who used a two-stop strategy, starting on the ultrasofts before two further stints on softs. However, this strategy was influenced by a late safety car that effectively allowed a 'free' pit stop.

Spa is the hardest circuit of the year for the power units. Over 67% of the lap is spent flat out, which translates as around 73s per lap, the longest accumulative wide open throttle time of the year. The first period of sustained throttle is the climb from the La Source hairpin to the chicane at Les Combes. It takes around 25secs (1,852m) with the driver flat on the throttle throughout.

The track drops over 40m from La Source before climbing over 80m back to Les Combes, equivalent to a gradient of 1 in 4. The descent compresses the internals but going over the crest of the hill, the vertical force is suddenly lifted and the parts unloaded, with the vertical forces switching to -3g.

The turbo will be rotating at close to its maximum to keep pace with the high rotational speeds of the ICE. The altitude will further increase rpm. At its most extreme the turbo will be spinning at more than 95,000rpm or over 1,500 revs per second.

Spa is one of the most demanding tracks on the MGU-K. Each of the braking points comes after a long burst of power so the energy dissipated through the brakes is enormous. The best opportunity for the MGU-K to recover energy is the Bus Stop chicane, which the driver approaches at well over 300kph and brakes down to just 75kph.

High-speed flowing corners such as Pouhon and Fagnes are the best opportunities for the MGU-H to recover energy. It will feed this energy to the MGU-K and ICE on the next period of throttle through Blanchimont.

Of the current drivers, Kimi Raikkonen has the most wins here with four, scored in 2004, 2005, 2007 and 2009. With three wins, Lewis Hamilton could match Raikkonen's record this weekend, while Sebastian Vettel has two wins here and Daniel Ricciardo one.

Ferrari is the most successful constructor with 16 Belgian Grand Prix wins, ahead of McLaren (14) and Lotus (8). At this particular circuit Ferrari and McLaren have both won 12 times.

If Raikkonen continues his run of podium finishes this weekend, it will mark the Finn's 100th visit to the podium, his first coming in 2002 when he finished third with McLaren in Australia.

Should the Flying Finn score his 100th podium finish - no pun intended - he will become the fifth driver to do so, the others being: Michael Schumacher (155), Lewis Hamilton (126), Alain Prost and Sebastian Vettel (both 106).