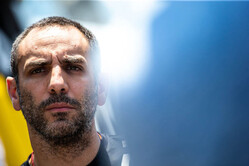 While much of the pre-Belgium guff centres on the "majesty" of the Spa-Francorchamps circuit and the unpredictability of the weather, the same cannot be said of the prospects for the official FIA press conferences.

This weekend sees the format return to that first used last year and which appeared to have been scrapped for 2018. Both the drivers' and team principals press conferences will be split in two with four drivers involved in part one and another four in part two. Friday's press conference will see three team representatives in each of the sessions.

The drivers' conferences should be pretty straightforward, with Fernando Alonso laying down his credentials ahead of his ambassadorial role for the sport, while Daniel Ricciardo will hopefully give us the low-down on why he 'led Red Bull up the garden path' before signing to Renault. Pierre Gasly and Carlos Sainz will simply talk about their new teams for 2019.

In part two, Max Verstappen will sing from the Red Bull hymn sheet, bigging up the forthcoming alliance with Honda, while Lance Stroll will no doubt shed some light on his father's recent acquisition. Marcus Ericsson and Stoffel Vandoorne will no doubt be faced with questions about Formula E.

On Friday things get far more interesting, with Cyril Abiteboul joining Christian Horner, and Gil de Ferran no doubt being placed in between the pair. Expect numerous snide remarks and awkward silences as the Red Bull-Renault divorce becomes ever messier.

As if that isn't enough, in part two, just weeks after Williams was one of several teams compromising the sale of Force India due to fears of the Silverstone-based outfit becoming Mercedes B-team, Otmar Szafnauer will get the opportunity to hear Claire Williams explain her hopes of a more meaningful relationship with the German manufacturer. Keeping them company will be Franz Tost... though if the FIA had balls it would have included Zak Brown and James Key.