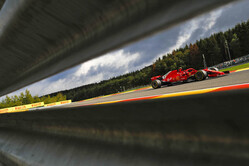 Ferrari's Kimi Raikkonen continued his strong track record of performance at the epic Spa-Francorchamps circuit by topping Friday's free practice times on the P Zero Red supersoft tyre. His best time of 1m43.355s, set in FP2, was nearly a second a half faster than the equivalent time last year.

The weather remained cool and dry, despite a few drops of rain in the morning, allowing the teams to complete plenty of running and collect data that will be particularly crucial for Sunday's race if it rains tomorrow, as is expected.

So far, there's a performance gap of around a second between the supersoft and soft compounds: a bigger gap than expected. This may change during the weekend, depending on the weather conditions.

Mario Isola: "The track was very quick right from the first session this morning, also as a result of the rubber laid down by the recent Spa 24 Hours, which we supply exclusively as well. There were no real surprises from the practice sessions, apart from the fact that the performance gap of around a second between the two softest compounds was somewhat bigger than the 0.6 seconds we expected. We're expecting the gap between soft and medium to be in the region of 0.8 seconds, but we still have to look at all the data carefully tonight. Tomorrow, everyone is expecting rain, although the weather forecast seems to be constantly changing, which is not unusual here. So far, the tyres have performed consistently and strongly on what is well-known as one of the most demanding tracks of the year, with only a few small cases of blistering reported in the afternoon."