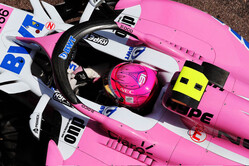 At a time the youngster should have been celebrating one of the finest moments of his F1 career to date, Esteban Ocon was instead revealing to Sebastian Vettel that he is to be dropped by Force India.

While Lewis Hamilton was being interviewed by David Coulthard on track, as they awaited their turn the German was overheard asking Ocon if he would be with Force India in 2018.

"The seat is taken," replied the youngster.

Asked by whom the seat was taken, Ocon said: "Have a guess... the one who bought it."

"Yes, but the other one," asked Vettel, meaning Sergio Perez' seat.

"The other one brings money," replied Ocon, referring to Perez and his Mexican backers.

However, there is increasing speculation that the move could take place before 2019, with talk that by Singapore, even Monza, Lance Stroll could be in the Force India, with Ocon replacing Stoffel Vandoorne at McLaren and Robert Kubica replacing Stroll at Williams.

"There is a lot of discussion going on at the moment," admitted Mercedes boss Toto Wolff. "But it is not down to one party deciding a movement, we need to put in place several chess figures, and that isn't clear yet.

"I have no doubt that Esteban will win races and compete for championships in the future," he added. "We have seen the talent today again.

"We thought his future was clear around Budapest," he admitted, "and it all changed within 48 hours but it is how it is. It makes no sense to complain... how things panned out was unfortunate.

"We will continue to help him in finding a short-term solution for him to drive," he insisted. "There's a lot of interest out there, it's just a matter of scanning the market in the next few days to choose the right option for him and the team. But I'm very optimistic for his future."