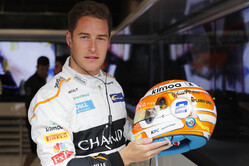 Fernando handed the wheel to Test and Reserve Driver Lando Norris for this morning's first practice session at Spa-Francorchamps. Lando's stint in the McLaren MCL33 in FP1 marks his grand prix weekend debut in a Formula 1 car, and he finished the session in 18th place after completing 26 trouble-free laps.

Fernando returned to the cockpit in the afternoon for FP2 and continued where Lando left off, completing various set-up changes and aero tests. He finished the day in 16th and completed 25 laps.

Stoffel, who is competing in his second home grand prix here in Belgium, was less fortunate with reliability than the sister car, and suffered a number of issues throughout the day including a minor brake problem and a water leak. He was unable to do any real representative running and finished both sessions in 20th place, completing just 13 laps in the morning and 25 in the afternoon.

All three drivers focussed on a combination of set-up work, correlation and aero tests across both sessions.

Fernando Alonso: "I missed FP1 today but it was not a big loss, as straight away I felt comfortable with the car and the circuit, which I know pretty well, so it was fine on that side.

"I'm happy that we tried both tyres and did some interesting tests, especially on Stoffel's car, so let's see what we can do to improve for tomorrow.

"It seems like it was difficult to find the right rhythm in the first session. We're lacking a little bit of performance so far this weekend, so we definitely need to work out where we can find a couple of tenths for tomorrow if we want to be in the fight.

"We don't seem to be lacking in one sector or one area in particular, as all of them seem to be quite similar. It's not just on one part of the circuit, which makes it even more difficult, but we have a couple of ideas to improve for tomorrow and Sunday. The target remains to be in the points on Sunday, and for that we know how important tomorrow's qualifying is."

Stoffel Vandoorne: "I had a day full of problems again today and it's not been the best start to the weekend. I had some brake problems at the start of FP1 and then some engine-related problems, so I didn't really manage to get any proper laps in and it didn't really feel like I've been working today.

"I started off with some problems again in FP2, so I had maybe one run that was more or less representative. It's been a very frustrating day for me, especially in front of my home crowd. I came here very optimistic, looking forward to racing here, with a lot of positive energy and a lot of support from the fans, and to start off the weekend like this was definitely not ideal. It feels like we've had so many problems lately and I'm really hoping to get some normal running. It's obviously very frustrating.

"The performance today was definitely not there. We're still lacking a lot of pace and competitiveness and there's still a lot of work to be done. I think we need a bit of a miracle this weekend to be able to extract some kind of good result. The only thing that could maybe push us up a bit higher is some rain or some tricky conditions. Maybe the rain will come - we'll see - but there's still a long way to go and it's hard to see us progress a lot this weekend.

"I think the team is definitely expecting me to perform and I think I've performed quite well over the last couple of races. We've had our issues, but we've showed some very good performance in Hungary. Obviously they want to see how we compare, but I think first of all the team should give me a car that is able to run on track before we can be compared."

Lando Norris: "It was a very busy day today, juggling between F2 and F1. I had to get on my bike to get up to the F1 paddock in time for FP1. It was a bit stressful but it was worth it!

"It's been a good day, anyway. I was a bit nervous this morning as it's obviously very exciting to be back in the car, especially in Spa, which is probably one of my favourite tracks. We got through our programme nicely and I got in a good amount of laps.

"I've driven here in the past in F4, Formula Renault, Formula 3, Formula 2 and F1 now, so I know how every car goes around here!

"We did some aero tests and none of my runs was a proper performance run, which was a nice thing to do, so it was not about speed but more about consistency and feedback.

"It's very different to drive in Formula 1, mainly because of the pressure. There are a lot more people here. I think it's a good thing that I get to see first-hand what it's like to drive in a race weekend, and to have a rough idea of where I stand compared to Stoffel and Fernando.

"After doing the Budapest test I feel pretty ready for any opportunity to jump in the car, and I'm getting more and more comfortable with everything I do, so it doesn't take me a while to build up.

"With so few opportunities in F1 in general to be in the car, I think you need to make the most of any chance to drive, to learn and to prove yourself, be consistent, be fast, be reliable and give good feedback, which I feel like I did today."

Gil de Ferran, Sporting Director: "Overall today has proved to be a difficult day for us. This circuit with its long straights is really exposing one of our biggest weaknesses in straight-line speed. In addition, we had a few mechanical issues with Stoffel's car in FP1 that curtailed our running.
"Lando, in the manner that has become typical for him, acclimatised himself to the car and the track very quickly, and produced a good, clean session for us.

"Our engineers have a lot of homework to do to sieve through all the data in preparation for tomorrow. It seems that the weather could be somewhat uncertain, which at the very least is likely to provide some excitement for the fans."