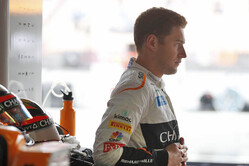 Fernando Alonso: "Even though Formula 1 has been on its summer shutdown, it feels like a lot has happened since Hungary! I'm pleased to finally confirm my decision for 2019, but that doesn't in any way deter from what me or the team will be focusing on for the rest of the year.

"We still have a lot of work to do and I'm really looking forward to being back in the car from FP2. Although I've raced more recently that anyone else on the grid, at Silverstone in WEC last weekend, I still can't wait to get behind the wheel at Spa. It's one of the best circuits on the calendar and usually a lot of fun.

"Spa is the longest track we race on and a lot of it is at full throttle, so it will be a challenging weekend for us. But, I feel fresh, motivated and ready to attack the weekend and the second half of the season."

Stoffel Vandoorne: "I've never felt more ready to come back after the summer break! I've really enjoyed the time away, being able to switch off and spend time with friends and family that I don't often get to see much between races, but I'm definitely looking forward to getting back in the car.

"My home race is always one of the key highlights of the season, and every year I go there we see more and more passionate fans in the grandstands. The feeling is incredible and the whole team always receives a very warm welcome everywhere we go.

"Although the DNF was hugely disappointing in Hungary, I had a much more positive feeling in the car and my main objective is to carry this momentum forward to Spa and these back-to-back races. Spa is also my favourite track – as it is for many other drivers – and I've raced there all through my junior career, so it feels like a second home for me and I hope we can put on a good show for the Belgian fans."

Gil de Ferran, Sporting Director: "The Belgian Grand Prix is a significant one for McLaren for a number of reasons. It's a legendary track on the calendar and one where we've had a great history. Next weekend we'll be celebrating a very special milestone – the 50th anniversary of our first win, by Bruce McLaren back in 1968, and we'll all be wearing special t-shirts to mark the occasion on Sunday.

"Secondly, this weekend will be the first time that our reserve driver Lando will drive the MCL33 during a race weekend, as he steps into Fernando's car for FP1 on Friday. This is not only part of his ongoing development, but also the evaluation and performance evolution of the car. We'll be taking a strategic view race-by-race at where else this might be beneficial for us over the coming grands prix.

"Spa-Francorchamps has a well-deserved reputation as a racers' circuit due to its historic significance and popularity among the drivers. We'll be head down and pushing hard as usual to aim for points for both cars in front of our Belgian fans at Stoffel's home race."

Straight-line speed: The cars are flat-out for large sections of the lap (22s in Sector One and 19s in Sector Three), so the main focus for the engineers revolves around how much downforce to strip off the car while continuing to give the drivers a compliant machine through the high-speed twists of Sector Two.

Unique difficulty: No other corner in F1 resembles the legendary left-right-left flick at Eau Rouge. It's been eased over the years, making it slightly less of a challenge, but the g-forces and the incline remain unique. The drivers approach the corner at 310km/h (190mph) and they experience a 2g compression at the bottom of the hill, before being subjected to 4.6g lateral through the right-hander, while climbing 190 feet towards the exit at Raidillon.

Biggest challenge: The weather. The track is located in the Ardennes, a mountainous region of Belgium that's infamous for its unpredictable micro-climate. Rain has become a regular feature of the race and it was at Spa-Francorchamps in 1997 that the first-ever Safety Car start took place on a water-logged track. Complicating matters further, the track is often dry in one section and wet in another, forcing the drivers and engineers to think on their feet.

Braking: Light. There are nine braking zones at Spa-Francorchamps, but only three of them are heavy braking events. Only 13 per cent of the lap is spent braking, which is similar to Suzuka in Japan.

Power: The cars use 2.2kg of fuel per lap, which is high - and can be explained by the long lap and the high percentage of full throttle.

Aero: Low downforce. Spa-Francorchamps has one of the highest average speeds of the season at 240km/h (149mph) and more than 70 per cent of the lap is spent at full throttle. These factors push the cars towards the lower end of the downforce spectrum. How low? That depends on a car's horsepower and the amount of aerodynamic drag it generates.