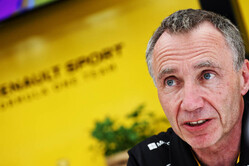 Cyril Abiteboul, Renault Sport Racing Managing Director: It's good to get back to track action after a well-needed rest for many during the summer shutdown. The break provided us with the opportunity to recharge the batteries, reflect on the first part of the season, and prepare for the many challenges ahead of us until Abu Dhabi, in order to defend our current position in the Constructors' Championship and allow Nico and Carlos to strengthen their places in the standings.

Most of our resources are now focused in preparing for 2019, which is another important step in the team's progress. Before that, we have to keep bringing developments to this year's package to find gains wherever possible. We are pushing on with aero developments, and will bring some concepts at upcoming races onto the R.S.18 that are ultimately destined for next year's car. We've been offensive and decisive in the driver market and now we have to do the same on both chassis and engine development.

Spa-Francorchamps is a challenging circuit, as is Monza where we'll heading right after, meaning we'll have a realistic approach given our competitiveness on these types of tracks. But we must be ready to seize any opportunity which might arise from the many unforeseen challenges we have seen in the past in the history of this legendary Grand Prix.

With the summer shutdown drawing to a close, the team have their game faces back on with Spa-Francorchamps next up on the calendar. Chassis Technical Director Nick Chester explains the challenges of the legendary race circuit located deep in the Ardennes.

What are the main characteristics of Spa-Francorchamps?
Nick Chester: Spa is a very interesting race track. It's power sensitive, especially nowadays with corners like Eau Rouge and Pouhon taken flat or close to flat out. Spa has always been a power sensitive track, but that has been increased in recent years, with around 20 seconds of full throttle between La Source and Les Combes. The weather can play a huge role too and you can have anything from being hot and dry to heavy rain. There are good overtaking opportunities into Les Combes after the Kemmel Straight if you get a good drag up the hill and also into the bus-stop chicane.

How tricky is it to strike the right balance between straight-line speed and downforce in the corners around Spa?
NC: It can be a tricky place to set-up for as you want to take drag off the car because the straights are long, but you have an area where you need quite a bit of downforce from the top of the hill heading down. Setting the wing level is a difficult choice as you push towards the medium downforce settings and we'll be looking at the scans to pick the right rear wing. We want to be quick enough on the straight and still have downforce on the car. You're trying to set the car up for the best lap time, while also competing against other cars who are quicker on the straight and therefore have to take more wing off than you like. We'll be weighing all that up to get a decent starting set-up and then also see what everyone else is doing.

Are we hoping for some surprises with the weather?
NC: We don't usually go to a track hoping it'll be wet, but we know from Hungary the car works well when it rains. We won't be worried if it does rain. Nico and Carlos are good in those conditions and our car works well in the wet, so it wouldn't be a problem.

How's the team feeling ahead of the next phase of the season?
NC: We're feeling refreshed after the summer break. Everyone has had a pretty tough first-half of the year, so they feel miles better after the shutdown. We're in a super tight battle in the midfield. We have to put more performance on the car to have a good fight until the end of the year, but our target is to retain fourth place. We're being pushed quite hard and we have a lot of work to do. We can do it, we have a 16-point gap, but one good race can wipe that out, as we saw in Austria.

What's required to stay on top in the midfield fight?
NC: We have two good drivers, we operate well and, while our car pace isn't quite where we want it at the moment, we're working hard to improve that. The goal is to out-qualify our rivals as that makes things easier, but if we don't, and if we're close, we tend to race well. The objective is to find raw car pace but, as long as we're close, we're confident we can out-race our rivals.

What's in the upgrade cupboard to be unleashed in Spa?
NC: We have a new floor for Spa and some other bodywork parts to go with that, which should be helpful.