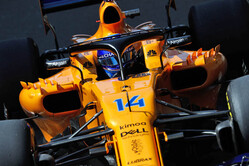 A day of mixed emotions for McLaren at the Hungarian Grand Prix as Fernando brought home four points in eighth position, but the team was cruelly robbed of a double-points finish due to a gearbox problem for Stoffel.

Stoffel made a great start, ending lap one in 13th place, just two spots behind his team-mate. The team executed a near-perfect strategy, and both drivers drove superbly to manage their tyres and pace to the maximum. Two solid pit-stops - a one-stop strategy for each car - later than most other teams compounded the strong rhythm of both cars throughout the race, and the pair were sitting in eighth and ninth positions from just over mid-way through the race.

A mechanical issue on Stoffel's gearbox put paid to any hopes of points to reward his performance, and he retired from the race after 49 laps.

Fernando Alonso: "It was definitely a good Sunday for us and it was down to the pit-wall, as they executed the perfect strategy. They decided to extend the first stint as much as we could, doing something around 15 laps more than the others, and that meant Stoffel and myself recovered three or four positions.

"We really deserved eighth and ninth places today, but unfortunately the gearbox problem prevented Stoffel from taking any points, otherwise it would've been a perfect Sunday for us.

"I'm happy we've delivered the result and have scored another four points for the team. Sunday is where it finally counts!

"Now it's time to relax, before jumping in a car again mid-August."

Stoffel Vandoorne: "A really disappointing race for me. We had a superb start, after we started a bit further down the grid than we wanted after yesterday, and gained a few places on the opening lap. We had really good tyre management in the opening stint and strong pace when it counted, a good pit-stop and we managed to jump a lot of cars during the pit window. It was a great strategy from the team to come out in the points with both cars and we were feeling comfortable, so it was just about bringing the car home.

"Unfortunately, we had a technical problem and I had to stop the car. It shows it's a mechanical sport. It's disappointing to finish like that but I think as a team we did everything right today. We got ourselves as high as we could and it's a shame not to finish the first part of the season with a few more points.

"On a personal note, I felt good this weekend. I think we've shown today that the pace was back to where it had been before, with a more 'normal' feeling, and I can be happy with my performance. I'm looking forward to the summer break, to relax a bit, clear my head and turn up in Spa for my home race."

Gil de Ferran: "Today was a very positive day for us. We had good pace on both cars and came very close to a double-points finish.

"Obviously we're very disappointed for Stoffel, who was driving very well and had to retire due to a gearbox failure.

"Fernando had his typical perfect drive, with the right blend of aggression and pace and tyre management. Although we're supposed to give him a present on his birthday, he gave us yet another one in the form of points!

"I want to congratulate our strategy team and pit-crew for executing the race to perfection, and thank everyone for the extremely hard work they've put in over this long and busy stretch of races.

"I wish everyone a nice break and I can't wait for the season to restart when we can hopefully keep stepping forward."