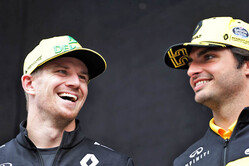 For various reasons, it's fair to say that Carlos Sainz' move to Renault has not worked out for either party. Though he initially appeared to offer Nico Hulkenberg a wake-up call following the disappointment of Jolyon Palmer, the German has now found his groove and regularly out-qualifies and out-races the Spaniard.

On loan to Renault from Red Bull, with Daniel Ricciardo set to remain with the Austrian team for 2019 and 2020, Sainz would regard a return to Toro Rosso as a step backwards.

"We think Carlos Sainz is a very good race car driver," said Zak Brown at the weekend. "This is the time of year where you talk to a lot of drivers as we have two seats that we are trying to fill.

"Fernando is not yet sure what he wants to do, what he wants to drive," the American added, "so those are scenarios that we are working through and talking to a variety of drivers. But we keep those conversations internal and ultimately it's a bit of a group decision about what we will do with drivers."

However, not wanting to go through all this again this time next year, Sainz is look for a deal that will offer him 'job security' in 2019 and 2020.

"At this stage of the year, again, my future is uncertain like it has been in the last three, which means I'm used to it," he said. "I know how to live with it.

"Hopefully I'll be looking forward to signing a two-year deal with my future team to make sure the next year I'm not in this position again," he added. "You get fed up of always hearing the same answer by a racing driver, but that's our job. Our job is to make sure that when you put your helmet on, you have nothing in your head."