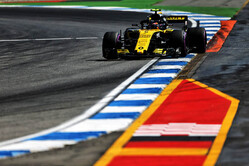 The fourth row of the grid for tomorrow's Emirates Grosser Preis von Deutschland will comprise of Renault Sport Formula One Team drivers Nico Hulkenberg and Carlos Sainz after a nail-bitingly close qualifying session at the 4.57km Hockenheimring today.

Following a wet FP3, clouds threatened further precipitation for qualifying, but dry tyres were used throughout. Nico was the quicker driver, qualifying seventh, just 0.016 secs off the car ahead, whilst Carlos was a tenth behind Nico in eighth.

Nico Hulkenberg: "I would have loved to have been a little bit closer to the front, but I'm happy with my laps and progression through qualifying. Tomorrow I'll give it a shot to hunt down the cars in front of me. It was great to see the home crowds and so much support today with full grandstands; that makes me proud and happy as a German and I hope to reward this support with a strong Grand Prix."

Carlos Sainz: "I'm pretty pleased with how things have gone today. Qualifying was quite challenging at the beginning, but we made big improvements throughout. I put in a decent lap in Q3 and eighth is not a bad position for tomorrow. I didn't use the new front wing in qualifying but the upgrade is working which is also great news. As always, we are targeting to put both cars in the points tomorrow. Our race pace looks promising, but we need to keep an eye on the tyres and managing them throughout."

How was qualifying today?
Alan Permane, Sporting Director: We're happy to get both cars into the top ten, but it was a shame for Nico that his final lap was so close to gaining another position on the grid, but ultimately there was not quite enough pace.

It's been quite a variable weekend so far: What are the considerations for the race?
AP: We don't expect to see a return of the heavy rain we saw this morning, so our focus will be on maximising the tyre performance life, in particular trying to avoid the pitfalls of blistering. It's likely to be warmer than today, so has potential to be a tough race. We're happy with our race preparations yesterday and confident we can show strongly.