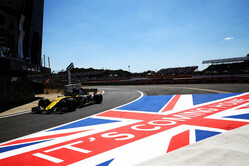 Renault Sport Formula One Team made a welcome return to the points courtesy of Nico Hulkenberg's sixth place finish in a fast-paced and action-packed 2018 Formula 1 Rolex British Grand Prix at Silverstone.

Under clear blue skies and blazing sun, Nico capitalised on an excellent start and strong opening lap – moving from his eleventh place grid slot into sixth, keeping cool and composed through a one-stop strategy with multiple safety cars to finish in that position at the chequered flag.

Carlos Sainz also made a superb start from sixteenth on the grid to ninth at the end of the first lap, running a two-stop strategy from which he ultimately retired after a collision at Copse on lap 38, while in the hunt for a top ten finish.

Nico Hulkenberg: "I'm very happy, that was a positive day. I think it was the maximum result we could ask for here. We had a good start, then a solid first lap straight up to P6. There was obviously some chaos going on in turns two and three where I managed to sneak through and pick up some places. After that it was a case of managing the tyres and the race. We'd elected to go on the Hard tyre, which was maybe a bit slower on pace, but we wanted to go for the one stop. A strong race all in all, especially with picking up another position at the end when the Red Bull spun. I'm happy. Eight points for the team is a good day."

Carlos Sainz: "I had a great start jumping seven places from sixteenth to ninth. We lost some positions after the first pit-stop but then, after stopping again for the Soft tyre during the Safety Car, we were looking good to get back in the points. It was a shame for it to end like that. Let's look forward to Hockenheim."

Cyril Abiteboul, Team Principal: "On a track we knew would be challenging for us we managed to outscore our direct competitors thanks to an excellent start, good strategy, well executed stops and an outstanding drive from Nico. It's a great reward, almost a relief after we were on the back foot following our difficult qualifying yesterday. It's too bad for Carlos, who probably had the right strategy called during the safety car to have an opportunity to gain a position. It was very clear that he was much more competitive than the car he was overtaking, but ultimately it was a race incident. With a good haul of points we can head to races where we hope to be more competitive, but the result should not distract us from looking at improving our pace on Saturday to give us an improved chance on Sunday."