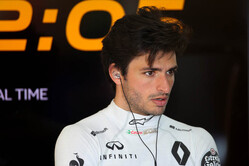 After a solid start, Nico was forced to retire from P9 on the eleventh tour due to a suspected turbo failure. Carlos was quick off the line too, but repeated tyre blistering arrested his potential, meaning an eventual P12 finish. Today's result was the team's worst since last year's Mexican Grand Prix, however it remains in fourth place in the Constructors' Championship.

Nico Hulkenberg: "Obviously it wasn't a great afternoon for the team. I suffered a loss of power and then the car went up in smoke and that was the end of our day. Carlos struggled as well, maybe because of the hotter temperatures today, and that made tyres hard to keep under control with a lot of blistering. It was a tough and disappointing afternoon, so we just refocus on Silverstone to make amends in a few days' time."

Carlos Sainz: "We had a lot of blistering on our tyres today and we need to investigate why. They degraded massively and a problem in the second pit-stop didn't help either. We missed out on big points unfortunately. We have another opportunity next weekend to bounce back, and there will be a lot of preparation work in the build-up this week. There is no reason why we shouldn't be up in the top ten again so I'm very positive for Silverstone."

Cyril Abiteboul, Team Principal: "Over the course of a 21 race calendar, there will always be good and bad weekends. This one is certainly in the latter category. It was a very tough Austrian Grand Prix with a number of problems that we've had to face, especially today. Nico's retirement looks to be due to a turbo issue. We will have containment measures in the very near future. It brought Nico's race to a stop after a good start and he had been in the mix for what turned out to be an eventful race. Carlos made a decent start and we thought we had made the right decision stopping under the VSC. We were in the fight in the top ten when suddenly Carlos experienced massive blistering from his tyres and we were left with no option but to serve an extra stop delayed by some damage to his car. This degradation is something we hadn't seen on Friday, and we weren't the only team to suffer in this manner today, probably due to very different climatic conditions. Our tough weekend was lightened by Max Verstappen's win, in front of so many of his and Red Bull's fans. We must stay motivated and stay focused. There will be plenty of opportunities to recover from today provided we react appropriately."