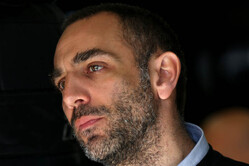 While he is the man that almost everyone would want on their fantasy F1 team, Renault has denied that it intends making a jaw-dropping bid to lure Adrian Newey away from Red Bull.

In recent weeks there has been media speculation that the French manufacturer was seeking to make an eye-watering bid for the Briton whose F1 cars have been winning titles since the early 90s.

However, talking ahead of this weekend's Austrian Grand Prix, Abiteboul - whose team has made some audacious signings over the last year, not least the FIA's own technical boss Marcin Budkowski - denied that he was looking to lure Newey to Enstone.

Asked if he was interested in securing the Briton's service, the Frenchman gave an emphatic: "No!"

"Massive respect to Adrian for what he's done and keeps doing," he continued. "I don't feel like he's going to be contractless, I rather feel like he's extremely committed to Red Bull and Aston Martin on a number of projects, on the one hand.

"On the other hand, we've got a strong, established structure that I fully trust," he added. "Bob, Marcin Budkowski who joined us and is taking up the global management of Enstone, Nick Chester, Rob White on Enstone operations. That's it, I think we've got the right structure to do the job, by far. Now, we need to make it work."

Since returning to F1 as a constructor, Renault has invested a small fortune in rebuilding the team it had previously sold in 2010, not only terms of headcount, which has increased dramatically, but also in terms of its facilities. Indeed, at a time the sport is seeking to impose a budget cap the French manufacturer has spent a fortune in its bid to return to the top, which is why the Newey bid wasn't entirely dismissed.

"We spend a lot of time building the team at the moment," admitted Abiteboul. "It was Bob Bell's goal in particular, he was somewhat away from the day-to-day work, from chassis design, which really is Nick Chester's responsibility.

"In late 2018, we'll reach the end of our initial three-year plan, we'll be in line with our goals building the team and our sporting goals.

"While I'm perfectly aware that we're still a second off the top teams' pace, the question we need to ask is: What's the plan for the next three years, from 2019 to 2021, so that in 2021, we're on target to fight for the championship?"