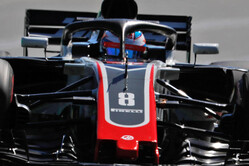 It's fair to say that the speed with which Force India's re-birth as Racing Point Force India has been carried out has led to much confusion over all manner of issues from the drivers' engine allocation to the team's garage slot and even how the new outfit should be referred to.

And then there's the all-important subject of money.

Despite the initial confusion, with the team appearing to have forfeited its 2017 prize money - along with its 2018 points - after going into administration, it now appears the new team will be paid the old team's (2017) prize money.

Speaking on Friday, Claire Williams, though not planning to crack open the Champagne like she was a couple of months back on hearing Liberty Media's initial plans for a budget cap and redistribution of the prize pot, was clearly delighted that Force India had been saved.

"This is obviously a great story for Formula 1," she said, "not just for our sport but obviously for the employees, so at Williams we are delighted."

However, in reality it's not such a great story for Williams.

Set to lose title sponsor Martini at season end, should the Grove outfit remain tenth in the standings - having already been leapfrogged by F1's newest outfit - this would further impact the coffers to the tune of $21m.

Then, with Lance Stroll virtually certain to jump ship to, you know who, the estimated $20m a year he hands over to the team will have dried up.

Adding up the figures, it would appear that already Williams is looking to be around $66m out of pocket next year, so stange that Williams should be so pleased for her Silverstone rivals and even more strange that she, along with her eight rival teams opted not to block Racing Point's access to Force India's prize money.

Then again, there are claims that Lawrence Stroll may have agreed some sort of 'sweetener', a move not impossible to imagine when you consider the estimated $80m he is said to have coughed up for his son's 'phantom race season' in 2016 as he prepared for his proper debut in 2017.

While one can therefore understand Williams motives for not blocking the prize money, one has to wonder why its rivals were so understanding.

According to Forbes, it's entirely possible that had Racing Point not received the $38.5m due to Force India, Mercedes might have stepped forward to cover the shortfall in order that the team could continue to race, and though Force India owed the engine manufacturer $13m, Racing Point clearly has the wherewithal to pay for its engines.

Furthermore, much like Ferrari and Haas, the German manufacturer could use the opportunity to use the new team as an unofficial B-team, which is not something Mercedes rivals want.

As a result, for whatever reason, as Otmar Szafnauer revealed on Friday; "the remaining nine teams have signed, so to speak, a document that enables us to keep the money that Sahara Force India had earned in years past".

The teams receive 47.5% of F1's underlying profit. This is divided in two, with 50% split between the top ten teams on a sliding scale based on performance. The other 50% only goes to those teams who have finished in the top ten in two of the previous three seasons and is split evenly.

The money is paid in ten instalments beginning in March, the year after it is earned. Consequently, Force India had already received five payments, half of what it was owed

Prior to Racing Point, the last new team to enter F1 was Haas which lined up on the grid in 2016.

The American outfit only began receiving the full allocation of prize money this year because it hadn't been it hadn't been in the sport long enough to receive the component which is split evenly.

If Haas hadn't needed to finish in the top ten in two of the previous three seasons, the American outfit would have been entitled to around an estimated $67.3m over those two years it has been racing.

However, Autosport reports that, Racing Point "has agreed a deal with F1 chiefs that will allow it to earn payments straight away".

"There are a lot of open questions which need to be answered before I would consider it to be closed or sorted," says team boss Gunther Steiner. "We have a contract where it is written what is possible or not, and in due course they will explain how they will sort it and how it will work going forward.

"We just want a little bit of time to understand what exactly is happening," he admits. "Everything happened so quick, it was like boom, boom, boom! And all of a sudden... 'Let's get them to the (grid)'.

"We have no problem with that," he insists, "but let's figure out the legal stuff. We are not in a hurry."

Autosport claims that even though the teams have agreed that Racing Point should receive Force India's $38.5m outstanding from last year, the full prize money entitlement still needs approval.

Should the teams refuse to allow Racing Point to get the money it will lose a key revenue stream, on the other hand, if it does get it then Haas will argue that it too should be paid for the past two years, a move, which if successful would boost F1's costs by $67.3m.

While this windfall would be good news for Haas, it wouldn't go down so well with F1 stockholders, what with revenue having reversed last year by $12m to $1.8bn leaving it with a $37m operating loss compared to a $47 million profit in 2016.