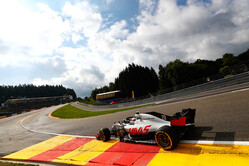 Haas F1 Team drivers Romain Grosjean and Kevin Magnussen earned strong starting positions for Sunday's Belgian Grand Prix by advancing to the final round of knockout qualifying Saturday at Circuit de Spa-Francorchamps. The duo qualified fifth and ninth, respectively, as the American squad placed both its drivers into Q3 for the sixth straight race and the eighth time this season.

Grosjean's performance equaled Haas F1 Team's best qualifying effort to date - fifth earned by Magnussen on July 21 for the German Grand Prix. The Belgian Grand Prix is the 13th race of 2018 and the 54th race for Haas F1 Team since its debut in the 2016 Australian Grand Prix.

Rain moved in for Q3, forcing teams to swap their slick tires after a single lap for Pirelli Cinturato Green intermediate tires as the rain intensified and covered the entire track. Drivers tip-toed on the slippery surface, with Grosjean setting the fifth-fastest time with a lap of 2:02.122 while Magnussen earned the ninth-best time with a lap of 2:04.933.

Magnussen and Grosjean used Pirelli P Zero Red supersoft tires in the dry running of Q1 and Q2 before switching to intermediates.

Before Grosjean, Magnussen and the rest of their Formula One counterparts participated in knockout qualifying, they had one final practice (FP3) to dial in their racecars for a quick lap around the track. Both Haas F1 Team drivers began the session on the Yellow soft tire before transitioning to the Red supersoft.

Grosjean ran 12 laps and set the 12th-fastest time with a 1:45.814 on his eighth tour. Magnussen also tallied 12 laps and earned his best time on his sixth lap - a 1:46.087 that put him 14th overall. Both drivers scored their quick times utilizing the soft compound, as a red-flag stoppage late in the session thwarted their plans for a flying lap on supersofts.

Romain Grosjean: "It wasn't easy, but it's great to have a qualifying session like this - beating some of the top teams and ending just behind the Force Indias, who were very strong in the wet conditions. We're fast in the dry as well, which is good. I think we were in front of one of the Red Bulls most of the time - that's quite exciting, as well. I was ready to give it all in Q3, and then the rain came and added to the fun. It was a close call at the start, whether we tried a lap on slicks to begin with. I was tempted to go for it, but I think it was just too wet, so everyone went for the intermediates. I'm happy with our performance, especially knowing that our last qualifying in the wet, we were not so good."

Kevin Magnussen: "It was a pretty hectic Q3. It had a lot of potential to be good, and in those kinds of conditions, you can make a big difference. You can also mess it up, which I did. The track was dry on the last lap. You go out on the intermediates, and it's wet with spray. It doesn't look like it's going to dry up, so you push with everything you can. Then on the second lap, the tires are already gone. By the third lap, the track was so dry that you get massively faster again, but today I missed out, whereas the likes of the Force Indias got their big chance. It's exciting, but obviously it's disappointing when it's not gone your way. At the end of the day, two cars in Q3 is good, and we made some good steps in the dry in Q1 and Q2. We were running in the top-10 consistently. I think the car's race pace is good, so tomorrow should be interesting."

Guenther Steiner: "I think Q3 was difficult for everybody with the rain. It was a bit of a lottery, but we are very happy with the result. To get into Q3, the whole team did a fantastic job to get there from yesterday's performance. We were not as strong as we normally are on a Friday, but we recovered very well, and that's down to the hard work of everybody. We're now in a good position for tomorrow to score points with both cars."