Magnussen aiming to win his own championship 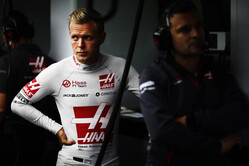 Aware that he has no hope of finishing in the first six in the 2018 Drivers' Championship, Kevin Haas is looking to achieve the next best thing, by winning an alternative championship he is running in his own head for 'best of the rest'.

"I'm kind of creating this big championship in my head," he tells Motorsport.com. "I know it doesn't exist, but in my head, it's something to motivate myself with.

"I've let go of those top three teams," he continues, "I'm not worried about that, but we are in an even fight with the two or three other teams in the midfield and that fight is something that I really want to win."

Currently eighth in the overall standings, but second to Nico Hulkenberg by 7 points in terms of 'best of the rest', Magnussen is 1 point ahead of Fernando Alonso and 15 ahead of Sergio Perez and Carlos Sainz.

Now I've been able to focus on this big championship that I have created in my mind and when I beat the other guys, I get the same emotions as winning.

"I don't care about the big three teams, they're in a different league," he insists. "When I get in front of all the midfield teams, I get those kinds of emotions and that's hugely motivating."

In the wake of a strong first half of the season that has seen him contribute 45 of his team's 66 point tally, the Dane is expected to be retained by Haas next season, though it remains to be seen whether he will be partnered by Romain Grosjean for a third year or Charles Leclerc.

"What do you want if you're not in a top team, that can't fight for wins and championships?" said the Dane. "It's a stable team that gives you a good car, that can still fight for points and still fight for that Class B championship. I probably have the best car of the trailing teams. I couldn't ask for more."