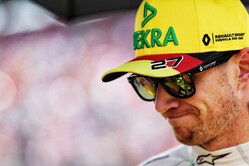 Nico Hulkenberg has been handed a ten-place grid penalty for next weekend's Italian GP after being deemed responsible for the start-line crash today that eliminated two other cars on the spot and eventually led to the retirement of two others.

The Renault driver, starting from the back of the grid following an engine change at the start of the weekend, crashed into the rear of Fernando Alonso whose McLaren was launched over the top of Charles Leclerc's Sauber. In the subsequent melee, Daniel Ricciardo was also hit, the Australian in turn clouting the rear of Kimi Raikkonen's Ferrari.

While Hulkenberg, Alonso and Leclerc were out on the spot, Raikkonen retired after two pit stops, one for the puncture caused in the initial accident and the other in an attempt to cure his car's poor handling as a result of the crash. Daniel Ricciardo was forced to stop for a new rear wing, but was told to retire his car 28 laps into the race.

The stewards reviewed video evidence, heard from Hulkenberg and the team representatives, the German stating that he completely misjudged the situation and freely admitted it was his mistake.

Hulkenberg will therefore drop 10 grid positions at Monza, while he is also handed 3 penalty points awarded, bringing his total for the 12 month period up to 4.

"When I hit the brakes, it locked up the front wheels and I slid," said the German. "These cars are aerodynamically sensitive, especially with cars bunching up ahead as you lose a lot of grip and load.

"I have to admit it caught me by surprise today. It was probably a misjudgement from my side as I was a bit late on the brakes, so it's frustrating for me, the team, and the other drivers caught up in the incident. That's racing and unfortunately these things happen."