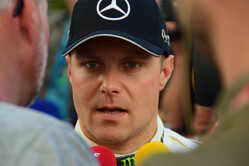 Valtteri Bottas has been handed a 5s time penalty following his clash with Sergey Sirotkin at the start of today's Belgian GP.

Starting from the back of the grid following an engine change, while Nico Hulkenberg - who had started alongside him - was causing problems for Messrs Alonso and Leclerc, Bottas was seen to push too hard going into T1 and hit the rear of Sirotkin's Williams under braking.

Called to face the stewards, who viewed video evidence, and heard from the Finn and a Mercedes representative, Bottas admitted the collision was his fault, that he had completely misjudged the situation and that the braking of the Williams caught him by surprise and that he should have left more margin.

The Finn, who went on to finish the race fourth and post the fastest lap, was handed a 5s time penalty which did not affect his result.

He was also handed 2 penalty points, bringing his 12-month total up to 4.