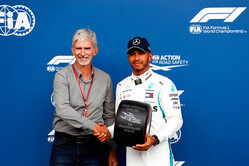 Conditions stayed dry until the end of Q2, during which Ferrari's Sebastian Vettel established a new track record with the P Zero Red supersoft, used by all the leading competitors to set their quickest times. As a result, the top nine will start on this compound. Mercedes driver Valtteri Bottas set his fastest time in Q2 within the top 10 on the soft tyre but is due to start the race from the back because of a grid penalty (also the case for Renault's Nico Hulkenberg). In the wet conditions of Q3, the intermediate proved to be the optimal choice with Hamilton setting pole by nearly one second.

Despite the fastest speeds and cars ever seen at the epic Spa-Francorchamps track, just one pit stop is possible tomorrow if conditions remain dry and tyre wear stays low.

Mario Isola: "After a lot of uncertainty about the weather, the rain finally materialised at the end of Q2. In the end, the Cinturato Green intermediates proved to be the best option in Q3, with different levels of water on the track, which is quite typical of Spa. This made it very hard to judge the final qualifying runs, with the cars driving on the intermediates for the first time all weekend. The race, by contrast, seems more likely to be dry, in which case we can expect one pit stop for the majority of competitors, with the correct pace management."