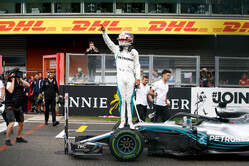 With overtaking a lot easier here than at most circuits, taking pole this afternoon will be more about prestige and psychology than actual need.

Having been quickest in all three practice sessions Ferrari will be feeling confident, while Mercedes is already on the back foot - albeit slightly - with Valtteri Bottas consigned to the back of the grid following his engine change.

Ferrari and Mercedes both have their latest upgrades available and in the next hour we should see them in all their glory, much to Red Bull's frustration.

Behind the 'big three' the battle for 'best of the rest' is as fraught as ever the order appearing to change with the wind. That said, Charles Leclerc was on blistering form earlier while teammate Marcus Ericsson appears to have received a major talent boost over the summer break.

Sauber, Force Pointy Thing, Renault and Haas are all looking strong in that mid-pack battle, while Williams and McLaren are clearly struggling. Poor old Stoffel Vandoorne is having a dreadful weekend, suffering a brake issue in FP2, needing a new floor in FP2 and being punted off by Bottas this morning.

Along with Bottas, Hulkenberg will also start from the back of the grid tomorrow after Renault changed his power unit.

Of course, this being Spa, there is always the weather to take into consideration, and while there was overnight rain, and a shower first thing this morning, it has remained dry ever since. However, in the moments before Q1 Race Control reveals there is a 90% chance of rain, even though the many clouds that fill the bright blue sky are fluffy and white and not looking at all menacing.

The lights go green and shortly after Gasly gets proceedings underway, followed by the Haas duo. Hamilton is among the early risers.

While most are on supers, Hamilton and the Ferraris are on softs.

The Bulls ahead out, both drivers opting for the supers.

Hamilton splits the Ferrari duo with a 42.977, having gone quickest in S2, nonetheless he remains 0.392s off Raikkonen's pace.

With five minutes remaining, Bottas heads out on the supers.

With Bottas yet to post a time, the drop zone comprises Alonso, Vandoorne, Stroll and Sirotkin, which isn't exactly surprising.

Bottas posts 42.805 to go second, which demotes Ericsson to the drop zone.

All eyes on Vandoorne and Ericsson as Leclerc improves to seventh.

"I had no rear grip, it's incredible" complains Sainz.

A dreadful session for McLaren and Williams, two legendary teams. Surely, anyone who believes that Lawrence Stroll is prepared to leave his son at Williams for much longer needs to take a long hard look at the situation. Though does Robert Kubica really deserve this sort of return to the sport.

No sooner have the lights gone green for Q2 than there are 13 cars on track, all on the supers. Bottas and Hulkenberg, understandably the two no-shows.

Not for the first time this weekend, Hamilton complains of a vibration, though this time it's "subtle".

Replay reveals Vettel made a mistake at Stavelot on his flying lap.

Ericsson and Leclerc are both over 2.5s off the pace, which seems odd when one looks at their pace in Q1.

With just over six minutes remaining, there's a very ominous looking cloud moving in. Magnussen is warned that there could be rain "any time".

Raikkonen gets proceedings underway, followed by his teammate. However, it appears Ericsson won't be running again, for the Swede is out of his car.

On the other hand, Bottas does head out.

As the clock counts down all are on track bar Ericsson and the Bulls.

Though he posts a PB in S1, Raikkonen loses pace in S2.

Ocon and Leclerc look set to improve as Hartley spins at T1.

Vettel goes quickest in S3, crossing the line at 41.501 to taker the top spot from his teammate.

In the moments before Q3, it starts to rain, albeit in the pit area. Or "change in climatic conditions" as race control warns with echoes of Ronspeak.

As the lights go green, the rain, such as it was, appears to have moved on.

Aware of the changeable conditions, all ten drivers are in a queue eager to get in that all-important banker lap... just in case.

As the drivers begin their out laps however it start to rain properly.

Bottas is caught out at Blanchimont and spins, the Finn doing well not to hit anything.

While most pit, Ocon and Perez stay out, the Panthers probably hoping to get in a lap time before conditions deteriorate further.

Perez does well not to hit the barriers at Raidillon, the Mexican learning the hard way that the gamble wasn't worth it.

With no wet running prior to this, and now on Inters, it's anyone's guess as to how this will go.

Ricciardo almost comes to grief at Les Combes, as full wets actually appear to be the order of the day.

Raikkonen pits as Hamilton takes a trip across the grass. The Briton is told he is the cusp of two more laps.

It appears that Raikkonen was running light on fuel.