Norris to get Monza FP1 outing 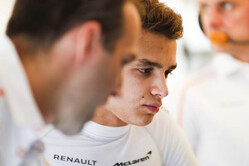 Lando Norris, who made his F1 race weekend debut on Friday, will get another outing in the McLaren next Friday as the Italian Grand Prix weekend gets underway.

"He will be in at Monza as we look to help develop his skills," confirmed the Woking outfit's race director, Gil de Ferran.

"He did a great job," said the Brazilian of Friday's outing when Norris replaced Fernando Alonso in the opening session.

"One thing he has is great adaptability to new situations, I've seen that in the tests he's had and also here," he added. "We wanted to bring him here as part of his development with a lower downforce level, more cars on track, track evolution and really give him that experience. He came up to speed very quickly and did a fine job, not making any mistakes."

The move is sure to add to speculation that Stoffel Vandoorne might not only be dropped in 2019 but could be replaced later this season, most likely by Esteban Ocon.

Sadly, ahead of his home race, Vandoorne describes his Spa weekend thus far as one of the worst of his career.

"Our general performance explains pretty much everything this afternoon," said the youngster after being eliminated in Q1. "We've been last in almost every session, we've had so many problems this weekend and I don't think there were any surprises in qualifying.

"It's my home grand prix and it's a real shame that we don't have better machinery to really put on a good show and give the fans a good result.

"I don't think there would have been a huge miracle if I hadn't had the incident in FP3," he added, referring to the incident involving Valtteri Bottas for which the Finn took the full blame. "We tried to play every card today, with a bit of slipstreaming as well and we didn't really progress any further, so I don't think it made much difference for me.

"I hope I can progress at least a little bit tomorrow. It's been a difficult weekend, we've not really had any performance at all, and I just hope tomorrow will be better."