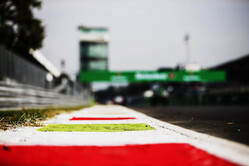 The only changes to the track at the Autodromo Nazionale Monza ahead of this weekend's Italian Grand Prix are double kerbs that have been installed at Turns 6, 7 and 10, while a kerb has replaced the polystyrene block in the run-off area at turn 4.

For Pirelli's home race, it has chosen the same nomination that has been in place for a couple of years - medium, soft and supersoft - but, as usual in 2018, with all the compounds a step softer compared to last season.

Although the cars are faster than they have ever been, this speed increase comes in the corners, so the benefits aren't always obvious at Monza, which is dominated by straights.

Among the top three teams there's a wide divergence in the tyres chosen: all six Mercedes, Ferrari and Red Bull drivers have made different choices.

"At Monza we have the same nomination as Belgium, another rapid and historic Formula 1 venue," explains Mario Isola. "Monza is all about longitudinal rather than lateral forces though, where engine power also plays an important part.

"The latest generation of cars means that speeds will be generally even higher, while the compound nomination is effectively one step softer this season. It's going to be interesting to see which effect this has, at a race that has always been won with a one-stopper over the past few years.

"Although qualifying well at Monza is historically important, Daniel Ricciardo's impressive performance last year showed how strategy can make a vital difference. We've already seen plenty of variation in the tyres that the teams have selected for the weekend, which demonstrates some different schools of thought when it comes to tyre strategy."

In terms of the power unit, Monza is the most power sensitive track of the season. More than 75% of the lap is spent at full throttle, more than any other circuit.

There are four long periods of open throttle, each holding an average of 13s bursts. The first is the pit straight, followed by the run through the Curva Grande, then from the Lesmos to the Variante Ascari and finally from Ascari to the Parabolica. The longest time the power unit will be at full throttle is the pit straight, which lasts 16s.

Despite the ICE being flat-out for most of the lap, fuel consumption per kilometre is relatively low compared to slower tracks. This is due in part to the short length of the track and to maintaining a constant speed throughout, but also due to the high average speed with low downforce package that reduces the time spent to complete the distance.

The long periods of wide open throttle generate a steady stream of exhaust gas. The energy available in the exhaust due to the high percentage of full throttle time means that the turbo will be at maximum speed for over 80% of the lap.

Despite the heavy braking for the three chicanes, the MGU-K is not significantly stressed in Monza. Each braking event is very short and there are only three slow corners. In comparison to a corner-rich circuit such as Hungary, the MGU-K barely recovers the maximum energy allowed. To compensate, the MGU-K recovers energy at partial throttle through overloading the ICE, although it will be difficult to harvest the max energy allowed by the regulations. The MGU-H will also feed the MGU-K down the straights.

The chicanes will see the cars brake from well over 300kph to 80kph but accelerate back up to 300kph in less than eight seconds. This creates a braking event of around one to two seconds, or quicker than a blink of an eye. It's important for the car to be stable under braking and acceleration so engineers will pay particular attention to the engine maps and how they interact with the low downforce aero configuration.

This weekend, Lewis Hamilton has the opportunity to equal Michael Schumacher's record of five Italian Grand Prix wins, the Briton having won here in 2012, 2014, 2015 and 2017. Sebastian Vettel has won here three times and Fernando Alonso twice.

Ferrari is the most successful team here with 18 wins, while McLaren has 10 wins.

While pole position isn't considered vital, while there were only 10 wins from pole between 1950 and 1999, since the turn of the century 14 victories have been claimed by the pole-sitter.