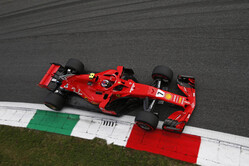 Despite the various claims that Mercedes comes to Monza as the underdog, the fact is that after four seasons of almost total domination there is clearly life in the old dog yet, with the German manufacturer having claimed just as many wins as its Italian rival this year.

Though Ferrari has made enormous progress this year, especially in terms of its updates, it would be foolish to believe the hype that is coming from some sections of the media.

Yes, the Ferrari is strong, but it is not bullet-proof.

Ferrari would very much like to lock-out the front row this afternoon, not only to give the Tifosi a much needed boost, but also to serve a psychological shot across Mercedes bows. Based on the evidence thus far however, Mercedes, and particularly Hamilton, is up for the fight.

With his teammate having taken on the latest C-spec engine upgrade from Renault, a move which consigns him to the back of the grid, Max Verstappen has opted to follow suit, though without penalty. Meanwhile, Marcus Ericsson and Nico Hulkenberg have also taken on new engines - the Swede a whole new car - and as a result they will start at the back tomorrow.

While the Panthers - which is a lot easier to type than Racing Point Force India - have been 'best of the rest' for much of the weekend, Kevin Magnussen was sixth quickest this morning, with Charles Leclerc and Romain Grosjean completing the top ten.

Other than that tantalising battle at the front, it looks as though the battle for midfield supremacy will also be stiff today and tomorrow.

While this morning's session was held in the dry, overnight rain meant the track was still greasy in patches, leading to a number of mistakes. In the minutes before Q1 some worrying dark clouds appear along with a few spots of rain.

Hartley is first out when the lights go green, but in no time at all he has company... lots of it, including the Ferrari duo.

Raikkonen complains of a vibration, the Finn leading a train of around eight cars.

As Vettel begins his first flying lap the crowd cheers and the flags wave.

Hartley posts the first time of the afternoon, the Kiwi crossing the ine at 23.684.

Stroll goes third (22.525), ahead of Alonso, Sirotkin and Vandoorne as the Silver Arrows head out.

Sainz goes sixth with a 21.732, ahead of Perez, Stroll, Sirotkin and Leclerc.

Verstappen and the Haas duo are among the last to appear, leaving Ricciardo as the only no-show.

Raikkonen improves to 2.798 but remains second, albeit just 0.040s off the pace.

Verstappen goes fifth with a 21.381, exactly the same time as Bottas.

As Hamilton improves but remains third (21.043), Vettel responds with a 20.542 having gone quickest in the first two sectors.

Hamilton was seemingly looking for a tow from his teammate, but the Finn was caught up in traffic.

Alonso complains of "something strange" under braking. He asks for team feedback.

Ricciardo finally heads out, the Australian needing to post a time within 107% of the best.

While Raikkonen heads out for another run, Vettel appears to have settled for his time.

Hartley fails to improve on 18th, as Gasly, Stroll and Vandoorne begin their final runs.

A mistake for Magnussen at the first chicane, the Dane currently ninth.

As the chequered flag is waved, Stroll goes tenth (21.838) which demoted Ericsson who had just improved.

Hulkenberg goes tenth, which pushed Perez into the drop zone, the Mexican failing to make the cut, as does Leclerc. While the Sauber driver lost out courtesy of a mistake at the first Lesmo, Perez appears to have missed the cut due to the team miscalculating the cut-off. Then again, that midfield battle was very, very tight.

We lose Perez, Leclerc, Hartley, Ericsson and Vandoorne. The Belgian is not best pleased to learn that he missed the cut and finished last.

The Haas duo are first out for Q2, joined by Gasly, Bottas and Alonso.

Magnussen makes a mistake in the second part of the first chicane and is lucky not be collected by his teammate.

Verstappen goes fifth 21.008), ahead of Grosjean, Magnussen and Gasly.

"It's very close in all the sectors," Hamilton is told.

Replay shows Bottas getting out of shape as he stops at the weighbridge.

"It's a disaster, it's a mess," says Gasly as traffic means he cannot improve on tenth. As he is told to clear a gap he is passed by three cars.

"Again, I went a little bit wide in the last corner," admits Vettel of his previous run.

Vettel is quickest in S1, but there are no improvements in S2. At the line Vettel posts 19.629, while Hamilton fails to improve.

Grosjean goes sixth, ahead of Ocon and Stroll, while Magnussen aborts his lap and fails to improve. Replay shows a little argy-bargy involving Magnussen and Alonso at the first chicane.

"What the hell," says the Dane, "looks like Magnussen wants to race," says Alonso.