Vettel edges out Hamilton in FP3 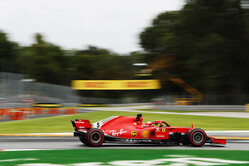 What with the rain in FP1 and Marcus Ericsson's acrobatics in FP2, the drivers only had around 80 minutes of dry running yesterday.

And while this session should be dry, we are expecting rain during qualifying but a dry race.

Understandably, Sauber broke the curfew last night, the crew burning the midnight oil as it built a whole new car for Ericsson.

Though Ferrari was quickest in FP2 yesterday, the gap to Hamilton wasn't as big as one might have imagined, though it was noticeable that Sebastian Vettel continually improved his times over an 11-lap sting on the supersofts.

On the other hand, an unforced error which saw the German spin off at the Parabolica brought back memories of his other homer race at Hockenheim.

Overall, Ferrari appears quickest, ahead of Mercedes, Red Bull and the Panthers.

Air temperature is 17.9 degrees C, while the track temperature is 27.4 degrees. And as a dark clouds suddenly appear in the distance, race control now claims there is a 40% chance of rain.

The lights go green and Ericsson is first out, the Swede keen to get in an install lap in what is a new car.

He is followed by Magnussen, Gasly, Sirotkin and Hartley.

In fact, Ericsson stays out, completing a second install lap before pitting.

Gasly reports that it is still "pretty greasy" at a couple of corners. This follows overnight rain, which is still dropping from the trees that overhang the track.

More drivers head out, a mixture of all three compounds, medium, soft and supers.

The McLaren pair post the first times of the day, Alonso stopping the clock at 25.734 and Vandoorne 26.751. Both are on the softs.

The Belgian subsequently improves to 25.097 while Alonso is warned about "wet patches" after a mistake at T2 which results in him having to weave his way through the polystyrene bollards. The Spaniard subsequently responds with a 24.321.

Hulkenberg splits the McLarens with a 24.402, the German, along with Ricciardo, will start from the back of the grid tomorrow following an engine change.

When Vandoorne reports a massive vibration, it soon becomes clear why, following a massive lock-up the left-front tyre is flat-spotted almost down to the canvas. "the tyres is destroyed," suggests the driver.

Seventeen minutes in, Raikkonen heads out on the supers, as Ericsson looks set to post his first time of the day. The Swede subsequently posts a 29.727.

Unsurprisingly, Raikkonen posts purples in all three sectors, crossing the line at 21.484.

Hamilton responds with a 21.692, the Briton question the decision to go out on new supers. "Bad idea," he says.

A 23.14 sees Bottas go fourth, ahead of Sainz, Alonso, Hulkenberg and Sirotkin.

As Hamilton improves to 21.932, Vettel complains of vibration, claiming that it is "not great in sector two". The vibration follows a mistake at the first chicane which saw him flat-spotting his front-left.

Ricciardo posts 22.310 to go fifth, while Verstappen is one of four drivers still to post a time.

The Dutch driver subsequently goes fourth with a 22.166, making him the highest placed driver on the softs.

"Give me a better gap, I have four cars in front, it is very difficult" complains Alonso. He is effectively told to get on with it.

A small improvement from Verstappen (22.061) who remains fourth.

Alonso improves to 13th with a 23.666, making him the second highest placed runner on the yellow-banded rubber.

Verstappen improves to third with a 21.816, leapfrogging Vettel in the process.

In traffic, Raikkonen, like Alonso, is also unhappy at the decision to send him out.

Despite the traffic, which means he only posts a PB in S2, Raikkonen goes second with a 21.122 - an impressive lap under the circumstances.

The Panthers are currently 'best of the rest', Ocon seventh and Perez eighth. Grosjean is ninth ahead of Leclerc.

Hulkenberg is told to pit after reporting that his DRS is stuck open. Following yesterday's issues with Sauber that's the last thing we need.

Vettel ups the ante, the German crossing the line at 20.509 after going quickest in the final two sectors. "I lost a little bit in the last corner," reveals the German, "I went a little wide."

In less traffic, Raikkonen also improves, the Finn posting 20.682 as the Ferraris leave Hamilton 0.883s in their wake.

The Williams duo remain rooted to the bottom of the timesheets, with the Toro Rossos keeping them company.

Interestingly, while Alonso is 15th, Vandoorne is currently 12th.

Hamilton splits the Ferraris with a 20.676 but remains 0.167s off Vettel's pace, while we have yet to see Raikkonen entirely free of traffic.

Quickest in S1, Hamilton digs deep, very deep, to close to within 0.081s of Vettel. Bottas also improves but remains 0.603s off the pace.

A 22.011 sees Magnussen demote the Panthers, as the Ferrari-powered teams ramp it up.

"Oh man, what is he doing," moans Grosjean after he comes across a suddenly slowing Hartley. Elsewhere, Sirotkin takes a run through the gravel and Perez takes a bumpy ride over the kerbs.

The Mercedes duo, in their efforts to close the gap, are clearly pushing it to the limit.

Grosjean wants to do another lap, but is told the team cannot afford the extra mileage.

Unhappy with the handling, Perez is told that there is damage to the strakes, no doubt from the excursion over the kerbs.

While Hamilton has closed the gap, one has to wonder what Ferrari might have up its sleeve.