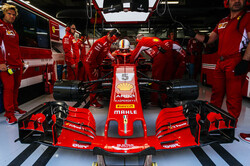 Sergio Perez led a Force India 1-3 in this morning's session, however, due to intermittent rain there was no slick running.

Kimi Raikkonen split the Panthers, however, teammate Sebastian Vettel was sidelined for much of the session after Ferrari opted to change his gearbox. However, this was his practice gearbox which was replaced with a spare, hence no penalties.

Having handed his car over to Lando Norris earlier, Stoffel Vandoorne is back in the MCL33 this afternoon.

As race control reveals there is a 60% chance of rain, Leclerc and Ericsson head out to get the session underway.

Red Flag... as Ericsson has a massive off at the first chicane. "Are you OK?" the Swede is asked. After an antagonising wait he replies, albeit breathlessly, "Yes, I'm OK". "I've no idea what happened," he adds.

Quite what happened is anyone's guess. As the Sauber approaches the first chicane the car suddenly and inexplicably veers to the right.

Replays give no further clue to the cause of the accident, the car suddenly lurching right and into the barriers. As the Sauber barrel-rolls a number of marshals run for cover.

As the car is placed on a flat-bed truck and repairs are made to the barriers, Ericsson makes a precautionary visit to the medical centre.

Interestingly, back in the Sauber garage, mechanics are checking the DRS flap on Leclerc's car. Indeed, another replay shows Ericsson's flap was wide open.

"Fair to say that the Sauber crash structure has been tested pretty comprehensively over the last couple of races," says Pirelli. "Conclusion: it's a strong car."

The session resumes at 15:22, leaving just over an hour's running. Understandably, there is a queue in the pitlane, with Alonso at the front.

As dark clouds begin to appear, more and more drivers heard out, among them the Mercedes duo.

Soon, all bar Leclerc, Perez and Stroll are on track.

Of the first wave, Grosjean is quickest (25.424), ahead of Gasly, Sirotkin and Sainz.

Ricciardo goes second with a 23.464 but is demoted when Vettel crosses the line at 22.640. However, while most are on softs, the German is on supers.

"There is a problem," reports Leclerc, "the Monegasque revealing that his DRS is staying open. He is told to pit.

Raikkonen (softs) takes the top spot with a 21.873 as Hamilton makes a mistake and runs wide.

A 23.077 sees Grosjean go fourth, which momentarily drops Bottas to fifth only for the Finn to respond with a 23.075.

"I'm going a bit everywhere under braking," warns Verstappen, "going a bit right... it's not giving me a lot of confidence."

Thirty-five minutes in, all bar Leclerc, Ericsson and Alonso have posted times.

Despite the first session effectively being washed out and the threat of rain later in this session, there is a long lull with absolutely no track action.

Eventually, Vettel gets things underway again, the German sticking with the supersofts.

Despite going quickest in S2, the German has a poor final sector and fails to improve.

More and more drivers head out to join Vettel, all sporting the red-banded supersofts.

"Why am I so slow on the straights?" asks Gasly. "Just checking," he is told.

Despite a tow from a Williams Vettel fails to improve, while Hamilton posts 21.854 having gone quickest in S1 but losing time in S3.

PBs in all three sectors for Ricciardo who goes fifth with a 22.296/

Verstappen is told to cool his tyres. "All corners, well over temperature," he is advised.

Vettel goes quickest in S1, and while he loses time in S2, the German's times are very, very impressive as he is on a ten-lap run.

However, a mistake sees him spin of backwards at the Parabolica. For a brief moment it looks as though he's stuck in the kitty litter, but to the delight of the crowd he is able to continue.

Back in the pits it is revealed that the German incurred a little damage to his rear wing endplate.

Leclerc is told to close his DRS manually. Along with Hartley and Alonso, the Sauber driver has yet to post a time on the supers.

Vettel continues on supers while Raikkonen is on soft, Red Bull and Renault are also on split strategies.

Bottas and Gasly lead the way in terms of laps completed, both having done 28 laps. Grosjean is on 27 and Sainz 25.

A mistake sees Bottas miss the first chicane, not for the first time this afternoon.

On the long runs, Raikkonen appears to have the best pace, though Vettel isn't far behind.

Ferrari clearly has the edge ahead of Mercedes, with Red Bull around half-a-second behind.