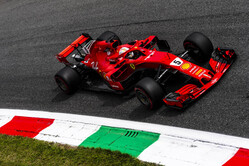 "Yesss!" cried Sebastian Vettel as he crossed the line at Monza having taken pole with a stunning 1:19.280.

However, the subsequent response wasn't quite what he was expecting. "P2, P2, Kimi on pole position, P1, P2..." came the reply.

"We speak after..." said the German menacingly, sounding much like an angry parent or partner, only omitting the words "wait 'till I get you home."

Indeed, despite locking out the front row at their home race, the Ferrari pair could barely raise a smile, and while this is customary for The Iceman, clearly Vettel was not a happy bunny.

Asked about his "we'll speak later" comment at the press conference, Vettel was giving little away.

"Clearly I wasn't happy, but I don't tell you why," he replied.

Pushed a little harder, when asked why it wasn't Raikkonen giving him a tow, what he meant by the "we'll speak later" comment and whether his teammate will be allowed to win, the German said: "Well, first question, because we have an order that changes every weekend and this weekend it was Kimi to go second. Simple.

"Second question? I don't tell you. That's the same question as I had before. Sorry. And the third one was 'is Kimi allowed to win'? Well, if he's starting from pole, I guess he's allowed to win. It's a long race. Obviously he wants to win, I want to win. Hopefully one of us will win."

Referring to his lap, he said: "To be honest it was not a tidy lap. I think the other laps were actually better, so... yeah... I lost a bit in the first chicane, the second chicane, the Lesmos, pretty much a bit everywhere… I think the last sector was OK but also not fantastic. It was just not a good lap and not good enough.

"Obviously, lucky to get second instead of third but... yeah. Just not good enough."

Looking ahead to the start, and the notorious first chicane, he said: "Obviously you are still always trying to get out ahead, no matter who you're racing but for sure you try to avoid contact but then again, as I said, you try to avoid that anyway. It's not like there's another car and you say yeah, I'm happy to make contact. With our cars you can't really afford to touch or be touched."