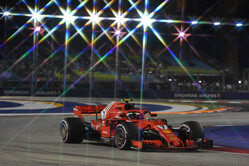 As usual, there was plenty of track evolution at the unique Singapore street circuit, with the drivers tackling the FP1 session in daylight before moving onto the cooler and more representative conditions of FP2 at night.

All three compounds were sampled, including the P Zero Pink hypersoft, which set the fastest time in the hands of Ferrari driver Kimi Raikkonen. The Friday benchmark he established was 0.8 seconds faster than the pole time last year, with plenty of improvement still expected to come at the 23-corner circuit. In FP1, the teams mostly used all three compounds, while in FP2 the work mainly concentrated on the hypersoft and ultrasoft.

So far, the hypersoft is 1.6 seconds per lap faster than the ultrasoft, with a total difference of roughly 2.4 seconds from hypersoft to soft: for the first time, there's a ‘step' in the Singapore nominations. The performance gap is likely to mean that all the drivers qualify on the hypersoft tomorrow, with the entire top 10 set to start on this compound.

Mario Isola: "This is probably the session where there's the greatest contrast between FP1 and FP2 of the entire year, and that was reflected in the times. Obviously FP2, with the asphalt temperature 15 degrees lower, was much more representative and this is when the most useful tyre assessment took place with different compounds and fuel loads. However, the picture is still not entirely conclusive, as the track continues to evolve rapidly. In particular, the teams were all able to take a first look at the hypersoft, which is performing in line with expectations here and has already set the track record in FP2. So far, we've seen high degradation on the hypersoft - especially at the rear - while the ultrasoft has been very consistent."