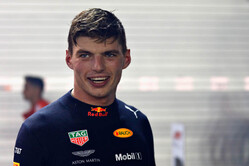 Following a difficult start to the season, which saw him involved in a number of incidents, leading to the inevitable media criticism which in turn led to a showdown in France, the youngster suggesting the press should apply the same criticism to Sebastian Vettel, Max Verstappen has settled down. Indeed, next time out, in Austria, he won, with a string of further convincing performances seeing him go fifth in the standings.

F1 technical boss, Ross Brawn, believes Singapore was clear proof Verstappen not only has the potential to win the title, but his decision not to make a move on Lewis Hamilton as they encountered back-markers is a sign of his growing maturity.

"It shows that the Dutchman has all the hallmarks of a future champion," said Brawn. "It's not enough to just produce phenomenal performances in some races if others are marred by silly mistakes, but more and more his races are characterised by not just prodigious pace but also composure.

"He is growing in stature," he added, "and he now needs a car with which he can always fight for victory, not just in certain situations. And even if Red Bull is a relatively young team, it has shown through their past success that they know how to do that."

Referring to the Red Bull driver's decision not to make a move on Hamilton in Singapore, he said: "He avoided unnecessary risks, perhaps aware that he didn't have a real chance of winning."