F1 gives first glimpse of its vision for 2021 cars 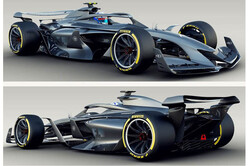 With the sport, under its new ownership, looking to see "great fights, all the way down the field, every year", along with plans to limit spending and to share the prize money more evenly, F1 is seeking to not only make the drivers able to go head-to-head by means of new design regulations but to make the cars look "so good, kids want to have posters of them on their walls".

"When we started looking at the 2021 car, the primary objective was to enable the cars to race well together," says Ross Brawn, the sport's technical boss. "What we established early on in our research is the cars we have now are very bad in following each other.

"Once the cars get within a few car lengths of each other, they lose 50% of their downforce. That's a substantial amount of performance lost. So we set about understanding why that was and how we can improve it. I'm pleased to say we're at about 80%.

"As time has gone on, another of the primary objectives was to make great looking cars," he added. "We want cars that look better than what you see in a video game, cars that kids want to have up on their walls. At each stage, as we have been evolving the car, we've had someone we are working with create a graphic representation artist to give us a feel of what the car could look like.

"That is not to control the development, because it's critical this development achieves its objectives," he insists, "but why shouldn't we have great looking cars as we're evolving the cars? We want a car that is inspiring. F1 is the pinnacle of motorsport and the car should look sensational." 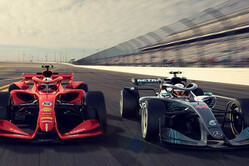 Working with the FIA, Brawn and his team have come up with a number of concepts, which are continually evolving.

The first demonstrated how the Halo could be made to be more aesthetically pleasing, while the second concept is more stylistic.

"As the aerodynamicists were evolving the car, the graphics designer was taking where they were and trying to capture it at each stage," reveals Brawn.

"Concept 2 is a bit more extreme," he admits. "One of the things you'll see is the bigger wheels. We're committed to 18-inch wheels for the future. They look better but there are a lot of technical reasons why we want them."

The most current is the third concept but Brawn admits there is still some way to go.

"The tyres and the wheels are the dirtiest area of the car, they cause huge disruption in the airflow," he says. "We are starting to look at devices that can stabilise the flow as it comes of the wheel. It's maturing as we go along."

While initial reaction from fans has not been entirely positive, many comparing the look to IndyCar and Formula E, Brawn admits that it is early days and there is still some way to go before the final concept is presented.

However, whatever look the sport decides on, Brawn admits that the powers-that-be are hoping it encourages new teams into the sport, while ensuring the current teams remain.

"We want to create an environment where there is a queue of people wanting to join F1," he admits. "The encouraging thing when Force India ran into trouble was that it had a number of suitors that wanted to buy it. If you remember Manor a few years previously couldn't sell the team. I think the confidence in F1 has since increased. We definitely want to have a queue of people that want to come into F1."

Brawn, who won F1 titles with Benetton, Ferrari and finally his own team, is also hoping the sport's new look will get youngsters involved.

"I've been involved in a number of initiatives where F1 is a catalyst to get young people's interest peaked in technology, the STEM topics - science, technology, engineering and maths," he says. "We're short of engineers of the future. If F1 creates the passion for young people to get involved on engineering, in science topics, and technology, that's a fantastic way of doing it.

"We want cars that are going to excite young people. F1 is a great opportunity to promote technology and through F1 in Schools, for the younger students, then there's Formula Student, which is a competition that goes on in universities."