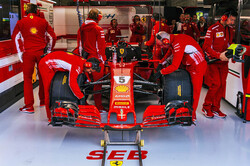 In the wake of the engine update which saw Ferrari take a significant step forward, despite the assurances of the FIA, speculation that the Italian team had a new "trick" ups its sleeve mounted.

Round about the time of the update, it was noticed that whenever the car was stationary, a bag of dry ice was placed on the camera above the cockpit.

While Ferrari insisted that the ice was to keep the camera electronics cool - a move that no other team has needed to resort to - rivals claimed it was a deliberate bid to block the camera and thereby prevent visual access to various settings it was using.

As a result, ahead of last Sunday's Italian Grand Prix, Ferrari was told to cease the practice, though the Maranello outfit responded by covering the camera lens with an umbrella.

"We did ask Ferrari to stop using these ice packs," confirmed an spokesman, according to Motorsport.com. "The main reason was that FOM were not happy with them doing it. The issue is one of internal ECU temperature which the FIA will continue to monitor with FOM.

"It prevented television seeing the dashboard, which inevitably led to several conspiracy theories," admitted the spokesman, "but the reality is that the FIA know everything we need to know about the dashboard software and it is entirely legal."